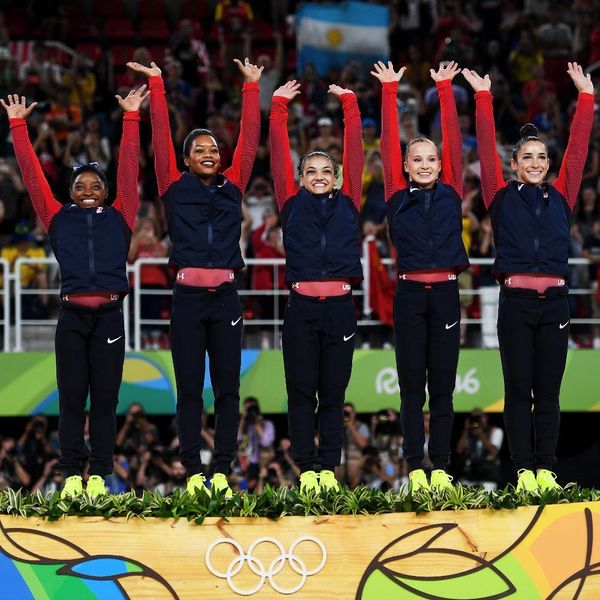 While the US Women’s Gymnastics Team was winning us over with their #girlsquad that rivals Taylor Swift’s famous group of gals, the world class athletes were not only living their best lives in Rio, they were also ready to take on the best of the best on the mats. Aly Raisman’s parents weren’t the only ones doing hilariously nervous in-seat gymnastics as the #FinalFive took the gold. Everyone at home was cheering for the ladies, including some of your fave celebs who took to social media to praise the gold-medal performance.

It was all smiles as Simone Biles (19), Gabby Douglas (20), Aly Raisman (22), Laurie Hernandez (16) and Madison Kocian (19) took the podium to take a bite of their gold medals after winning top scores for their artistic gymnastics performances. And they weren’t the only ones smiling hard.

To be young again pic.twitter.com/wiF1lqTdqo

Ghostbuster’s Leslie Jones (whose amazing tweets snagged her a gig covering the games in Rio) had a cheeky take on the win.

While other celebs were just downright awed, impressed and totally proud.

#FinalFive love that my daughter gets to watch you girls, and learn that hard work and dedication pays off. Real #Rolemodels #inspiration

Wow. That was incredible. These young women are unbelievable!!!! #USA #womensgymnastics #Olympics

North is watching @Simone_Biles in awe! She's rolling around on the bed pretending to copy her lol

Congratulations to the #FinalFive on your gold medal performance!

What a legacy that will live on forever. Congratulations Martha and the #FinalFive!! #Rio2016 pic.twitter.com/piyhjiCfOv

Were you totally blown away by the #FinalFive? Tweet us @BritandCo!