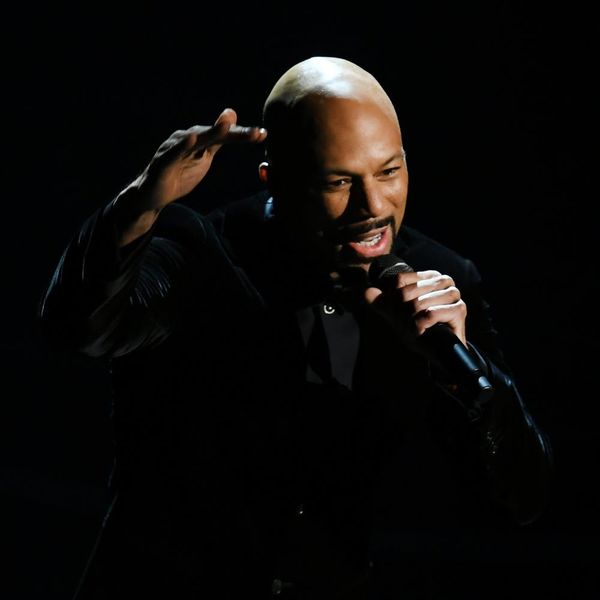 During his performance at the 2018 Oscars in Los Angeles last night, rapper-actor Common was not only joined onstage at the Dolby Theater by activists from all walks of life, but he added some activism his own. While performing his Oscar-nominated song, “Stand Up for Something” from the movie Marshall, the artist specifically called out the National Rifle Association and President Trump, causing the NRA to clap back with a pre-recorded commercial.

“Tell the NRA they in God’s way and tell the people of Parkland we say àse” — a West African philosophy about creating change. “Sentiments of love for the people from Africa, Haiti, to Puerto Rico,” Common said at the beginning of his stirring performance.

The NRA was quick to respond, posting their own tweet to let Common and the Motion Picture Academy know that they “stand” for the US. The reply was clearly a dig at both the rapper’s statements and a specific moment in the performance, where the rapper and singer Andra Day took a knee in honor of the peaceful protests many athletes have adopted under the lead of former NFLer Colin Kaepernick.

.@common @TheAcademy: This is what the #NRA and its members stand for. #Oscars pic.twitter.com/elDV3zteF9

“For the land of the free, and the home of the brave,” retired Navy Seal Dom Raso says in the NRA’s 60-second clip. “From high school gyms to high school stadiums, every time I see our flag wave, I feel a humbling reminder of the brave who keep and have kept us free. I stand to honor the sacrifices of the generations before me. Heroes who charged into battle through bombs and bullets, who lost their brothers and still pushed through. Fighting for every inch of our freedom.”

The NRA wasn’t the only target of Common’s Oscars night performance. The artist also mentioned the president, rapping, “these days we dance between love and hate. … A President that trolls with hate. He don’t control our fate because God is great. When they go low we stay in our heights. I stand for peace, love and women’s rights.”

What did you think of Common’s performance? Let us know @BritandCo!

Kat Armstrong
Kat has been a writer, social media maven and mom for longer than she's willing to admit. She's also spent time in front of and behind the camera, interviewing celebs, politicians and acting as a producer for fashion and artistic photography shoots. When she isn't writing for various orgs and publications, she's hanging with her kids, husband and French Bulldog, Peter, in Toronto, Canada.
Controversy
Current Events
Controversy Oscars Politics