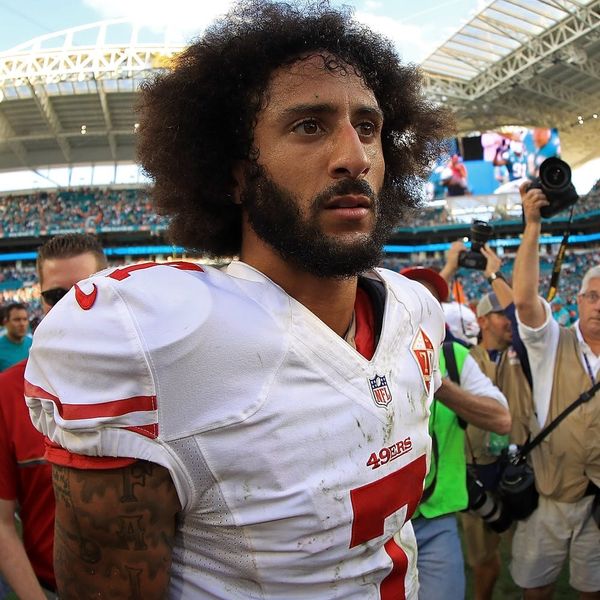 It has been *a year* for unsigned football player Colin Kaepernick. Kaepernick kicked off the now-ongoing protest act of kneeling during the national anthem at the start of football games during the 2016 season, and spent much of that season supporting Black charities while peacefully protesting at every game. Flash-forward to the current 2017 season, and Kaepernick has remained unsigned (some, including Packers QB Aaron Rodgers, argue it is due to his protests), but taking a knee has continued.

Although the former 49er isn’t playing in the NFL currently, GQ magazine has named the quarterback America’s Citizen of the Year, putting the activist on their December cover.

Colin Kaepernick is GQ's first 2017 Man of the Year. Read his cover story at the link in bio. (📸@martinschoeller) #GQMOTY #colinkaepernick

Kaepernick wanted to make his cover story more than just a bio. Rather, the athlete told the magazine that he wanted to “reclaim” the story of his protest and explore the history of world-class athletes involved in public protest. Instead of simply telling his story, the magazine and the quarterback decided to create a visual history lesson, with Kaepernick starring as legendary sportsmen who stood up to oppression.

Colin Kaepernick will not be silenced. He's been vilified by millions and locked out of the NFL—all because he took a knee to protest police brutality. But Kaepernick's determined stand puts him in rare company in sports history: Muhammad Ali, Jackie Robinson—athletes who risked everything to make a difference. (📸@martinschoeller) #GQMOTY #colinkaepernick

The images call to mind visuals like Mohammed Ali’s iconic anti-Vietnam war protests. Meanwhile, Kaepernick’s friends and admirers spoke to GQ about his actions, and what we can all do now to better support civil rights in 2017. While his friend, filmmaker Ava DuVernay, called him “eloquent,” Women’s March organizer Linda Sarsour told the magazine that she thinks the footballer’s legacy is bigger than what even he might think.

“There might even be a day when we’ll be walking down Colin Kaepernick Boulevard and people will remember what Colin Kaepernick did, just like we remember Muhammad Ali. And I truly believe that in my heart,” Sarsour posits.

While it’s uncertain whether Kaepernick will play in the NFL again, his ability to leverage his peaceful protest into meaningful social justice is hitting a nerve both in the sports world and out. Hollywood legend and famous civil rights activist Harry Belafonte told the magazine he had hope for the future with men like Kaepernick leading the way.

“In my 90th year of life, to see people like Colin Kaepernick having gotten the message and carrying the cause forward is the greatest reward I could ask for,” Belafonte said. “Any person with a high profile has to consider their responsibility to help keep the nation honorable and honest. After all the courageous things that have been done by so many courageous people [in the past], it’s a cop-out to not speak up.”

What do you think of Kaepernick’s cover story? Tell us @BritandCo!

Kat Armstrong
Kat has been a writer, social media maven and mom for longer than she's willing to admit. She's also spent time in front of and behind the camera, interviewing celebs, politicians and acting as a producer for fashion and artistic photography shoots. When she isn't writing for various orgs and publications, she's hanging with her kids, husband and French Bulldog, Peter, in Toronto, Canada.
Diversity
More From Diversity