25 Celeb Selfies That Summed Up the Oscars 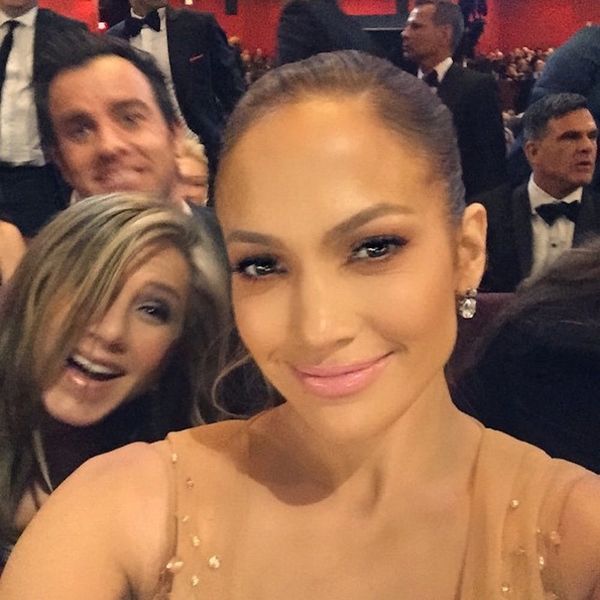 When you’re really, really ridiculously good looking, you’re wearing the most amazing gown ever, your hair is done to perfection and you’re surrounded by golden statues, you HAVE to take a few selfies. It’s obligatory. These 25 celebs agreed. Scroll on for some of the most epic selfies to date, and don’t forget to check out all of our Oscars coverage.

1. Jennifer Lopez: We don’t know what we like better: the fact that JLo was snapping a selfie in her Oscars seat or that Jennifer Aniston and Justin Theroux photobombed her. Overall, it’s a pretty epic selfie. (via @jlo)

2. Naomi Watts: We’re glad Naomi Watts’ brother snapped this photo. We were dying to see the back of that gorgeous gown again. (via @wattsupphoto)

4. Dwayne “The Rock” Johnson: When an event is as big as the Oscars, even The Rock can’t resist a selfie with the golden statue. Can you blame him? (via @therock)

5. Reese Witherspoon: Does this photo look like it’s from another era or what? Reese looks stunning, like a classic Hollywood movie star. (via @reesewitherspoon)

6. Diane von Furstenberg: There is so much to love about this photo. First, even the queen of wrap dresses takes mirror selfies. Second, she does it the old school way, with a DSLR. (via @dvf)

8. Gina Rodriguez + Common: Even the star of The CW’s Jane the Virgin snagged a photo with Oscar winner Common last night. Both looked classy as heck. (via @hereisgina)

9. Mario Lopez + Lady Gaga: Mario is now the unofficial king of selfies. He snapped SO MANY on the red carpet, but when it’s your job to talk to every celebrity, why not take some selfies? (via @mariolopezextra)

10. Kelly Osbourne + Brad Goreski: Looking as cute as ever, Kelly and Brad did what they do best: judged fashion. Brad’s silver tux was on point. (via @kellyosbourne)

12. Jay-Z + Beyoncé: An Instagram roundup isn’t complete without at least one appearance by Beyoncé. The royal couple looked as regal as ever at an Oscar after party. (via @officisls_c_)

14. Maria Menounos: The red carpet aficionado graced up with not one, but two hair selfies. Now we just have to figure out how we can copy her hairstyles for our next party. (via @mariamenounos)

15. Ross Matthews + Kelly Osbourne: Ross and Kelly make the red carpet so entertaining, we almost like it more than the actual event itself. Those sparkly mics are amazing. (via @helloross)

16. Jennifer Hudson + Meryl Streep: JHud had an epic night. She brought the house down with her performance AND she got to take multiple photos with Meryl Streep. (via @iamjhud)

17. Idris Elba + Jessica Chastain: Our #MCM Idris Elba posted this photo with his presenting partner to Twitter while they were waiting backstage. (via @idriselba)

18. Jamie Chung: Obviously excited about her movie Big Hero 6 winning an Oscar, Jamie Chung snagged a great selfie with her team and their surprisingly heavy golden statues. (via @jamiejchung)

19. Khloe Kardashian: Is there any question that the Kardashian family rules the land of selfies? You can always count on one of the sisters to snap a few good ones. (via @khloekardashian)

21. Joe Zee + Solange: The editor-in-chief for Yahoo Style found Solange looking as amazing as ever at an Oscars after party. We’d want to take a selfie with her too. (via @mrjoezee)

23. Ryan Potter: The voice of Hiro in Big Hero 6 appeared to be extra grateful for his film’s Oscar win. If you were in the same room as these life-size Oscars, how many selfies would you snap? (via @ryankpotter)

25. Common: After a huge night, Common passed out on the couch. Celebrities: They’re just like us! Except their awards watch over them while they sleep. (via @common)

Did you see any good Oscar selfies on Instagram that we missed? Let us know the comments!

Amanda DiGiondomenico
Amanda is a freelance writer and graphic designer who blogs about living a stylishly nerdy life at The Spendicate. A lifelong resident of Baltimore, MD, Amanda is an art school dropout, who managed to earn a masters degree in nonfiction writing. On the weekends, she's an expert guacamole maker, a novice jogger and an intermediate yogini.
Beyonce
Party
Beyonce Kardashians Lupita Nyong'o Miley Cyrus Oscars
More From Party