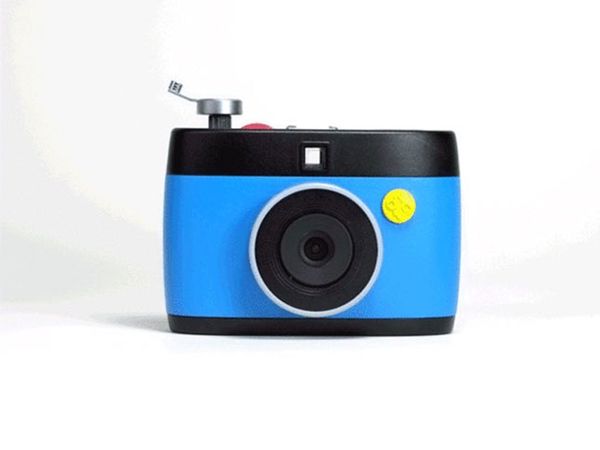 Along came iPhoneography, and there was no longer just one way to take a picture. Point and shoot became point and filter/record/animate (then share!) — all on one device slender enough to fit in your dress pocket — and it made your digital camera feel like a dinosaur. Because it lacked that kind of versatility and customization, your digital camera became a “second camera” and then quickly became a relic, ‘cause who carries around a “second camera” nowadays anyway? Once you meet OTTO, the answer just might be Y.O.U.

OTTO is a completely hackable digital camera that lets you make instant GIFs. And if the spunky looping animations hold a special place on your browser like they do here at Brit + Co., this is a big, big deal. To star in your own, simply rotate OTTO’s pop-up crank scene by scene, just like you’d do with the capture button to make a video on Vine or Instagram. When you’re done capturing your Beyonce-inspired dance moves, rewind the crank to give OTTO the memo that you’re done, and it’ll shoot that GIF to your smartphone for easy sharing.

So we’re stocking up on props and practicing our best photo booth poses — that’s for sure. But remember, OTTO is so much more than a GIF making machine. It comes loaded with kooky shooting modes that transform your photos into viral-ready graphics. With the press of a button on its companion app, OTTO can scramble pixels to make Magic Eye-looking compositions, capture vibrant timelapses and even employ its facial recognition technology to drop Deal With It shades onto every face in your photo. Really.

If that’s still not enough to satisfy your customization cravings, you can design your own. Because OTTO was built using the latest Raspberry Pi technology, it can be tweaked or totally rewired to create hundreds of unique stylings. Finally! A digital camera we actually want to get our hands on. You too? After making a pledge of $199 to OTTO’s now fully+ funded Kickstarter campaign, it’s time to start DIY-ing an old-school camera strap.

Do you see yourself using OTTO to make your very own animated GIFs? What other photography innovations have caught your eye recently? Tell us in the comments below.