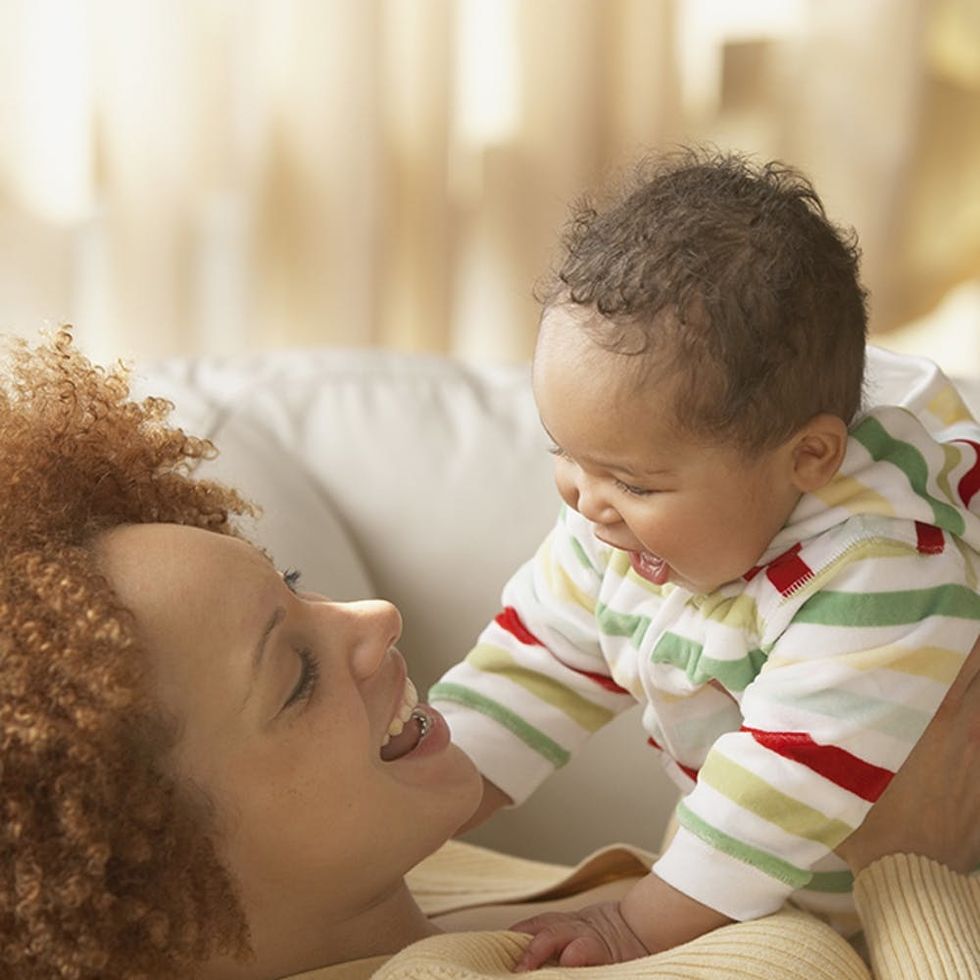 Forget what you think you know about baby talk — we’re talking “parentese,” a way of talking to your babe that can help nurture their vocabulary as they grow. Parentese, a type of baby-directed speech, is more than the made-up sing-songy combos such as “baaaby wayby” that many people associate with new parents. Recent research from the University of Washington, published in the Journal of Theoretical Social Psychology, found that the way parents speak to their infants has a real impact on their kiddo’s later vocab skills. Want to know more? Read on to learn more about the science behind parentese.

To start with, it’s not baby-talk or made-up speech. Instead, it’s the way you talk to your baby — the sounds your voice makes, the intonation, and how clearly you speak.

To speak parentese you need to slow down, exaggerating vowels and upping intonation. Even though this type of communication means changing the way you speak, you don’t necessarily need to alter what you say. Real vocabulary is more than acceptable: It’s necessary.

What Did Researchers Look For?

University of Washington Institute for Learning & Brain Sciences (I-LABS) researchers followed 77 parents and their infants, putting them in either a control or a coaching group. The parents all wore audio recorders, recording two weekend days’ worth of family conversations with their babies at age six, 10, and 14 months.

The coaching group received (as the name implies) coaching on communicating with their kiddos using parentese. The control group didn’t. The researchers focused on the interactions between the parents and their children, examining how the parents talked to their babies and how the babies responded — including the use of parentese by the adults and the use of any type of speech by the littles.

What did the researchers find?

After reviewing the speech and communication patterns of the parent-child participants, the researchers found that coaching helped. (No big surprise.)

What does parentese have to do with language skills?

The parents in the coaching group used parentese more often, and their kiddos also showed some pretty marked increases. The coached group babies babbled in 43 percent of the recordings. In comparison, the control (non-coached parent group) babies only babbled in 30 percent of their recording. While babbling isn’t exactly speech, it’s your infant’s primary method of communication. And the babies who were hearing more parentese were communicating significantly more often than those who weren’t.

But that’s not all. The recordings, and parent reports, showed that the babies who heard parentese more often also spoke more words at 14 months.

What does this mean for you?

To start with, the research shows that parent-child interactions matter. Whether you’re at the grocery store, at home, at daycare, in the car, or anywhere else, talk to your kiddo. The more you communicate with them, the better.

The research also points to the use of parentese as a way to pad your child’s language skill development. So slow down. Speak clearly, distinctly, and with excited exaggeration. Again, use real words. The content shouldn’t change, but how you speak should.

Erica Loop
Erica Loop is a freelance writer living in Pittsburgh. When she's not busy creating kids' activities for her blog Mini Monets and Mommies, you can find her trying to hang out with her teenage son, being chased by her two Olde Boston Bulldogs or teaching a children's karate class (she's a third degree black belt!).
New Moms
Parenting
New MomsParenting

Add This Traditional Japanese Breakfast Recipe To Your Morning Routine

Where You Should Vacation This Summer Based On Your Enneagram

Get Ready For Sandal Season With These At Home Pedicure Ideas