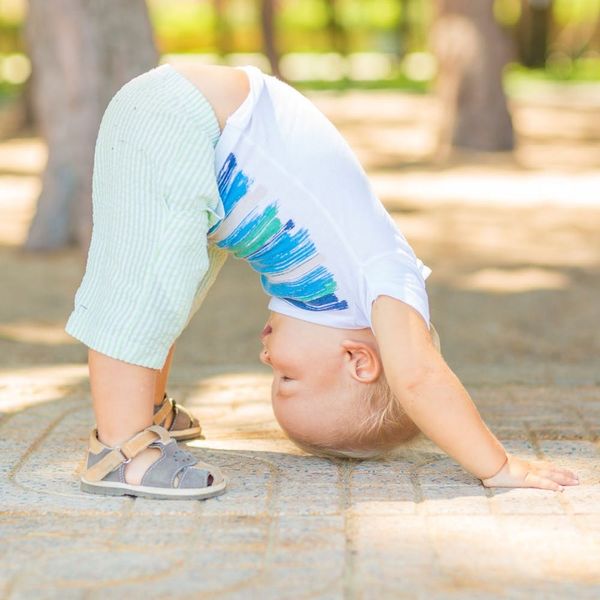 Naming a baby can be pretty stressful. After dealing with parents’ and grandparents’ expectations, society’s often harsh judgments about originality and celebrities stealing your favorites, you probably just wish the pressure was off already. Well, now you can relaaaaaax, thanks to this list of super chill baby name suggestions. These creative baby names are all about peace, tranquility, serenity and calm, just like life with baby will be… right?

1. Alana/Alaina: Meaning “harmony,” this pretty name lends itself to plenty of spelling variations if you want to give it an original twist.

2. Clementine: You might think of the citrus fruit first, but its meaning comes from “clemency,” as in mild and merciful.

3. Freda: Looking to get in touch with your German roots? This pretty and traditional name means “peaceful.”

4. Harmony: This on-the-nose harmonious name is a great pick for music lovers.

5. Irene: Given that Irene is the Greek goddess of peace, it’s no surprise that she rhymes with “serene.”

7. Olive/Olivia: What’s the international symbol for peace? The olive branch, of course! Extend it to your baby with either the #4 most popular girls’ name or the slightly more hipster version.

8. Paloma: The other ubiquitous symbol for peace is the dove, which is what this Spanish name means.

9. Paz: Here’s another Spanish name, meaning “peace.” It’s also a Hebrew moniker and a great choice for those looking for a religious name.

10. Serena: Whether she turns out to be more of a Williams or a Van der Woodsen, your Serena will hopefully turn out to embody the “tranquil and serene” meaning behind her name.

11. Shiloh: Have you ever seen a name change its meaning so quickly? Once shared with the beagle from a classroom bookshelf staple, it’s now WAY more associated with Brangelina’s cutie. It happens to go all the way back to Biblical times and means “tranquil.”

12. Winifred: Sure, it’s a bit of an old lady name, but you can always opt for the cute and trendy Winnie as a nickname. Both mean “blessed peacemaking.”

1. Axel/Axl: You might be surprised to learn that a name this rockin’ is actually Scandinavian and means “father of peace.”

2. Colm: A great Irish alternative to the more popular Colin, Colm means “dove.” Not to mention it’s only one letter off from calm.

3. Clement/Clemente: Both are the masculine form of Clementine and once again stand for mildness and mercy.

4. Fritz: Usually if something’s on the fritz, that means it’s freaking out. But the German name originally represents a “peaceful ruler.”

5. Galen: This Greek name means “calm” and also has ties to science. For all you nerdy parents out there — it was the name of a second-century physician, surgeon and philosopher credited with large contributions to early medicine.

6. Giotto: This peaceful name is the Italian spin on the name Godfrey, meaning “peace of God,” and a close cousin of the way more popular Geoffrey.

7. Oliver: Just like little Olive and Olivia, Oliver is closely associated with the olive branch — a universal symbol of peace.

8. Pax/Paxton: Brangelina definitely know how to create a buzz around tranquil names. First Shiloh, then Pax, which is Latin for “peace.” The unisex name Paxton is even more popular.

9. Sheehan: Want to get in on that last-names-as-first-names trend? Skip the usuals and try out this peaceful Irish surname.

10. Solomon: It’s about as Old Testament a name as they come, and has even greater Hebrew roots because it comes from the word shalom, meaning “peace.”

11. Stellan: Grab this Scandinavian name, meaning “calm,” before it catches on.

12. Tully: A strong alternative to Sully, this Irish surname works just as well as a given nickname.

What chillaxed baby names are giving you good vibes? Share your faves with us @BritandCo.

Molly Griffin
Molly is a writer and editor from Boston who loves traveling, eating and occasionally being a little too candid. She lived in Dublin, Ireland for the last four years but recently moved to San Francisco to escape the rain. Now, she’s on the lookout for a good proper pub.
Parenting
Baby Names
Parenting Unique Baby Names
More From Baby Names