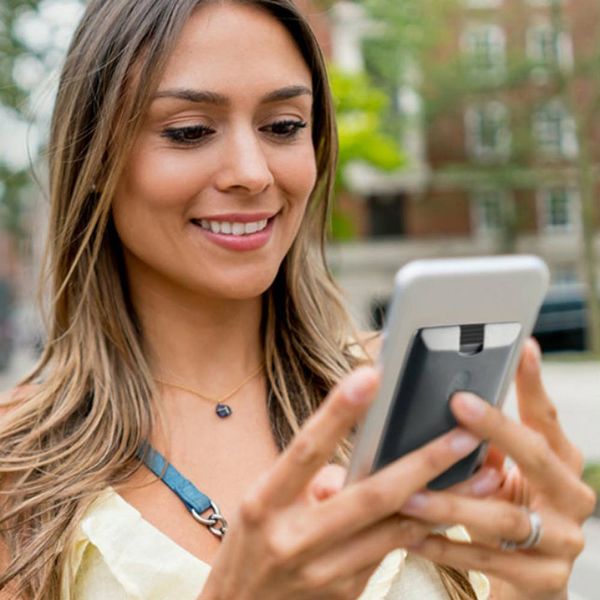 With celebrities stepping up to share their sexual assault experiences and sexual assault activist Brie Larson recently refusing to clap for Casey Affleck at the Oscars, it would seem that we’re ever so slowly lifting the secrecy around this terrible issue — but we still have a long way to go. With information comes power, though, and April’s Sexual Assault Awareness Month should serve as an opportunity for all of us to get the tools necessary to protect ourselves and support those who’ve already been affected by assault. One new device called Aluma Connect can help keep you safe and take a more active role in protecting your loved ones as part of their “social safety network.”

Aluma Connect is a slim (eight millimeters, to be exact) device that attaches to the back of a cell phone and works in tandem via Bluetooth with an app (available for iOS and Android devices). When faced with a dangerous situation, users can activate a *very* loud alarm by pulling a toggle on the device. Simultaneously, a user’s social safety network — a self-selected list of contacts that may include family, friends, or a significant other — is activated. The app connects the members of the network (who don’t need to have the app or device themselves), pinpoints the user’s location using a GPS, and makes a direct call to emergency services.

Tracy Carson, who’s the director of education at Aluma Innovations, as well as a counselor, says she was drawn to the project because of her experience working with assault victims in the wake of tragic events. According to Carson, 80-90 percent of sexual assaults are perpetrated by a person that the victim already knows, which is why Aluma also comes equipped with a silent alarm that users can activate by pushing down on a small depression on the device.

“What I love about this is that, often, you might be in a compromising situation but you don’t want to sound the loud alarm,” she says. “The opportunity to trigger the silent alarm is a safe way to let your social safety network know that you’re in trouble and you need help, even if you don’t want the person you’re with to know.”

“The genesis of Aluma Connect came… after learning that 25 percent of college women are being assaulted during their college career,” founder of Aluma Innovations Todd Baldree reveals. The idea for the device came about when he realized that other personal safety measures — such as a key alarm or pepper spray — can be easy to forget, especially for busy college students and city dwellers. But, Carson says, “No one ever forgets to bring their cell phone. Our founders wanted to weaponize the phone that we all always have with us.”

With an extra level of security attached to their phones, Aluma wants women to feel empowered. “Empowerment comes as a natural result of feeling safety,” Carson says. “We might run the extra mile, study later at the library, or simply feel empowered to own our surroundings and not be in fear of them.” While sexual assault is never the fault of the victim, we have some major work to do to stop the crime from being attempted in the first place, so the power of protection is undeniable.

Aluma Connect devices are now available for pre-order and cost $100 for a single device or $90 per device for a three-pack, with delivery expected in June. By purchasing a device, you’ll also be helping end the sexual assault epidemic in other ways. Twenty-five percent of Aluma’s profits will be donated to causes that are working to stop sexual and aggravated assaults.

“In addition to our device and app solution, which help to combat the problem head-on, we feel that donating that same percentage of the device profits to other groups fighting to do the same will help combat such a negative rate with a positive one, and put an end to this epidemic even faster,” Baldree explains. We hope this smart device, with an even more incredible corporate charity program, lands in the hands of thousands of women over the next few years.

What do you think of the Aluma Connect device? Tweet us @BritandCo!

Alli Hoff Kosik
Alli Hoff Kosik is a freelance writer who is passionate about reading, running, rainbow sprinkles, her lipstick collection, watching embarrassing reality TV, and drinking pink wine. She lives in Brooklyn with her husband and (in her dreams, at least) three golden retriever puppies. Listen to her talk books on The SSR Podcast.
Wearable Tech
Health
Wearable Tech Womens Health