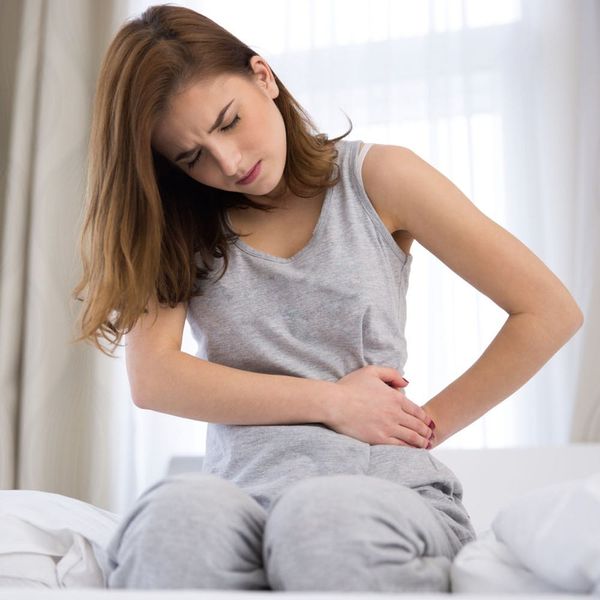 Thanks to politics, Americans are more stressed than ever. From career burnout to relationship problems, serious stress has probably affected your happiness in at least one way during the past few years. If you don’t put in the work to manage your stress, it can also manifest physically, causing all sorts of issues, like insomnia and super-tense muscles. Possibly scarier, though, is that even if you don’t realize you’re dealing with a mental health issue, it can cause some pretty surprising — and serious — physical symptoms. To help you become more aware of the impact your mental health has on your entire body, we asked doctors and psychologists to share some major physical symptoms that are linked to anxiety, stress, and depression, as well as a few more disorders.

When you’re experiencing unusual or painful symptoms and the doctors don’t have an easy answer, you may have a medically unexplained symptom (MUS), which is defined as a symptom “not accounted for by organ disease or a structural abnormality after running medical tests,” according to David D. Clarke, MD, president of the Psychophysiologic Disorders Association, who specializes in these difficult-to-diagnose problems. Unfortunately, he says that most physicians lack formal training in how to evaluate whether there’s a psychological cause for physical symptoms, so they often find these patients very frustrating.

Patients with no answers must feel frustrated too. And this isn’t a small problem. Physical symptoms caused by a mental disorder afflict about one in six adults, according to Dr. Clarke, who’s personally treated over 7,000 patients suffering from MUS. He says common mental causes include stress, anxiety, depression, lack of self-care skills, PTSD, and the lasting impact of childhood traumas. When emotional factors cause physical symptoms, the condition is called somatisation, and, if it’s severe or long-term, a somatoform disorder.

If testing and medical evaluations haven’t turned up a physical cause, doctors and patients should consider the person’s mental health. One barrier to faster identification of a somatoform disorder is that patients often don’t even know they’re dealing with major emotions. “This lack of awareness of emotions is common in people with stress-related symptoms, particularly when they are survivors of a dysfunctional childhood,” Dr. Clarke explains.

1. You’re not regular or have major stomach pains. “Chronic digestive issues are often related to mental health, from diagnosable problems like irritable bowel syndrome (IBS) and Crohn’s to mysterious complaints that doctors have trouble treating medically,” explains Rachel Kazez, a licensed therapist and the founder of All Along. Even constipation has been associated with depression, anxiety, and stress. In general, even if the digestion issue wasn’t originally caused by emotions, it usually gets much worse when a patient is suffering from stress or anxiety, since the stress overcomes the unconscious reflex a healthy gastrointestinal tract has.

2. You’re experiencing blurred vision or vertigo. While these are much less common physical manifestations of stress and depression, these vision issues have been linked to mental health in some patients, according to Dr. Clarke. As to the cause, Dr. Clarke shares that there are limited functional MRI studies of the brain as of now (they’re a bit different from an MRI because they measure brain activity by detecting changes in blood flow), but that they “show evidence of changes in nerve pathways in people who suffer from stress-related pain or other symptoms. For example, one study found that when you inflict pain on a patient with fibromyalgia, the areas in the brain that are activated differ from those of healthy people experiencing the same pain.” It’s fascinating that stress can have such a profound effect on the body.

3. You’re losing your hair or your weight is fluctuating a lot. Stress can definitely contribute to thyroid problems, and, according to Svetlana Kogan, MD, the opposite is also true: a thyroid condition can cause mental health issues. “Thyroid hormones are essential for proper mental functioning and emotional wellness,” instructs Dr. Kogan, explaining that when a thyroid is underactive (hypothyroidism), patients could gain weight or notice their hair is thinning, as well as suffer from depression. By the same token, she says, people with overactive thyroids (hyperthyroidism), who often experience weight loss and massive appetite, exhibit some degree of psychosis. “Everyone with these thyroid-related conditions should be screened for mental illness,” Dr. Kogan encourages.

4. You’re sick ALL the time. We hope you’ve never been this overextended, but if you have suffered from extreme stress, you may have gotten a headache, felt nauseated, or just had super-low energy. But did you know the stress you experience may actually be breaking down your immune system? “Recent research has shown that chronic stress is associated with the body having difficulty regulating the inflammatory response,” notes Linda Sacco, PhD, a licensed clinical social worker and VP of behavioral health services at Talkspace. “Inflammation is partly regulated by cortisol and if cortisol is unable to serve its function, it can’t assist in controlling the inflammation. The immune system can then become immune to cortisol, and various illnesses — such as frequent colds and infections — develop more frequently.” So Emergen-C and hand sanitizer may not be the answer when you find yourself getting hit with cold after cold. After you’ve been checked out by a doc, Dr. Sacco recommends setting up an appointment with a therapist: “Therapy can help to uncover and address the underlying causes of the distress, which may decrease the frequent illnesses.”

How do you de-stress? Tweet us your tips and tricks @BritandCo!

Whitney Akers
Whitney is a writer that's equally drawn to the energy of a big city and the peacefulness of the Redwoods. If she's not lucky enough to be on an international adventure, you'll find Whitney enjoying all the urban hikes, used bookstores and fancy cocktails San Francisco has to offer.
Healthy Living
Health
Healthy Living Mental Health Womens Health
More From Health