The Most LOL-Worthy Memes from the Election So Far 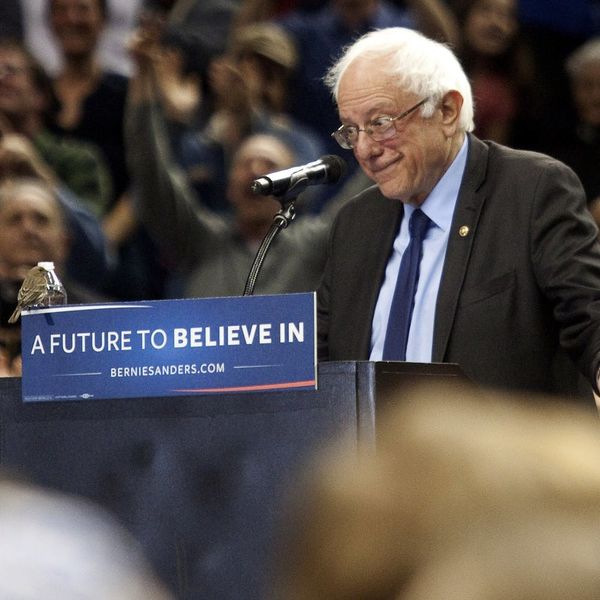 February really was an exciting time for jokes. The debate that took place on February 6 was largely unremarkable, except for the entrance. And boy howdy, what an entrance. After Chris Christie’s uneventful introduction, Ben Carson stayed put on the walkway to the stage (?). Never one to be upstaged, Donald Trump took his place beside Ben (??). Jeb Bush was visible for several seconds behind the two of them, clearly confused. By the time he walked out, he looked back at the two of them and momentarily dropped his politician’s mask of politeness, so overcome with bewilderment was he (!). Then, while they tried to coax both Ben and Donald onto the actual stage, the moderators forgot about candidate John Kasich (!!!). Historians and psychologists will be dissecting that footage for centuries to come. In the meantime, we can appreciate the ridic-ness. (Photo via Joe Raedle/Getty)

For some reason, some of Bernie Sanders’s young, Internet-savvy fans enjoy imagining the 74-year-old man as a hip-hop-loving partier who’s totes down with the kids. “Hillary vs Bernie” is all over Twitter, and usually takes the form of the “issue” proposed as a rap lyric, a part of youth culture or something to do with school, like “you forgot your homework.” Inevitably, Bernie’s response is cool and in the know, while Hillary’s is stilted, goody-two-shoes or confused. Whether it’s true or not, it’s definitely fun to take a break from thinking about the economy to imagine Bernie Sanders saying “ay, fam, what’s good” to a group of teens in his characteristic gruff manner. (Image via Twitter)

The New Jersey governor dropped out of the Republican race and promptly threw his support behind Donald Trump, which led to both criticism (of him) and memes (of his horrified face during a Trump speech). Christie looks so alarmed, so upset, while also clearly trying to maintain composure, that people had a field day with it. Ronan Farrow dubbed the music from Psycho over the footage, while weirdos on Twitter made his photo into Illuminati-related memes. (Screenshot via Vine)

CAFE describes itself as “the news… roasted,” which is exactly what we could all use right now. The site has humorous articles (and is home to wildly successful outcome predictor Carl Diggler, a fictitious pundit who has been more accurate than Nate Silver at predicting primary results). (Photo via @cafedotcom)

Without any disrespect or snark intended, the man’s face, or more accurately, his entire head, is a sight to behold. From the hair to the color of his skin to the sheer volume and range of expressions he can make, Donald Trump is, from the neck up, a marvel of watchability. This Vine encapsulates that expressive range. (Photo via Isaac Brekken/Getty)

Last week, Bernie Sanders was addressing a crowd in Portland, Oregon when a small bird landed on his lectern. After it flew away, Sanders said, “I think there may be some symbolism here,” and then shoehorned in a point about ending war. Something about the tiny bird, so unbothered by the crowd and seemingly so intent on spending some time next to the Bern, has inspired comparisons to Snow White. (Photo via Natalie Behring/Getty)

If you like your comedy confusing and sometimes deeply unsettling, Vic Berger IV is the guy for you. What does this Vine of Obama doing the tango tell us about the election? What even, really, is the “joke”? Who knows, and who cares. It’s weird and it’s funny and sometimes that’s all a thing needs to be. (Screenshot via Vine)

What’s your favorite campaign meme? Tweet us your thoughts @BritandCo!