7 Unusual Pregnancy Side Effects You Might Not Know About 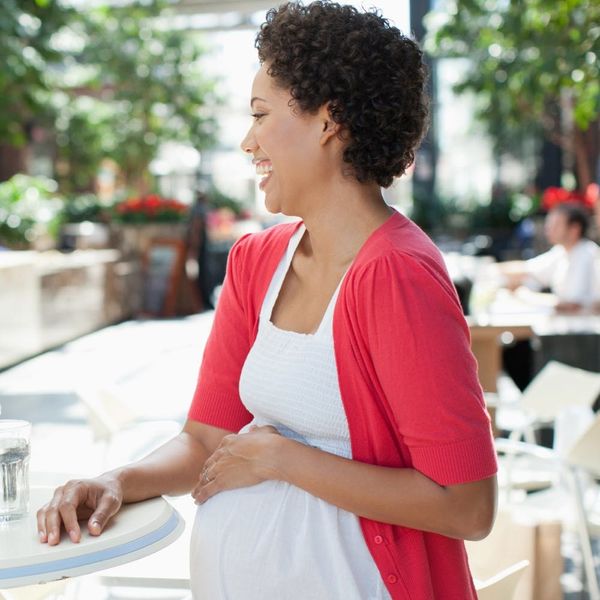 There are pregnancy side effects that are well-known — such as morning sickness and backaches — but, like Kate Middleton’s hyperemesis gravidarum, there are a few that may send you straight to Google. While every pregnancy is unique, many of the symptoms that go along with being a human incubator aren’t as publicized. Here a few to be aware of so that you can be better prepared.

1. Skin Tags: Pregnancy hormones can do amazing things to your skin… or weird ones. You may have a radiant glow or you could discover a skin tag or two (or 10) popping up around your body. The good news is that skin tags are harmless. The not-so-good news is that if you want them removed, your doctor will likely advise you to wait until after you’ve had your baby.

2. PUPPP Rash: It’s a weird acronym for an incredibly long name, but a PUPPP (pruritic urticarial papules and plaques of pregnancy) rash is slightly more common than you may know — occurring in about one in every 150 pregnancies, usually in the third trimester. It’s not harmful to the pregnant person or their baby, but the rash is very itchy, which can be incredibly irritating for someone who’s already feeling a million months pregnant. A PUPPP rash usually starts on the abdomen and can spread over the hips and thighs, and as far north as the breasts. Treatment for the rash may include anti-itching creams, prescription oral steroids, and soothing oatmeal baths. The rash typically disappears anywhere from a few days to a couple of weeks after the baby is born.

3. Bleeding Gums: Another side effect you can thank your hormones for is gum disease. While the word “disease” can sound pretty scary, the less intimidating — and more common — side of this is gingivitis, which is usually noticed when your gums bleed while you’re brushing your teeth or flossing. If left untreated, gingivitis can develop into a more serious level of gum disease, but if you practice good oral hygiene daily, it will likely be an inconvenience that disappears once you have your baby.

4. Heartburn: An old wive’s tale says that if you have frequent heartburn during pregnancy, it’s a sign that you’re going to have a baby with a lot of hair. While a scientific study from the National Center for Biotechnology Information actually found this to have some truth, the heartburn you feel while pregnant is often also due to (drumroll, please) hormones. Hormones for the win again! According to the American Pregnancy Association, progesterone causes the valve between the stomach and esophagus to relax. When this happens, stomach acid can pass into the esophagus, causing irritation. Naturally, like all pregnancy-related symptoms, the heartburn will go away once the baby is born.

5. Nasal Congestion: If you feel like you have a stuffy nose you just can’t shake but don’t really feel any other cold-like symptoms while you’re pregnant, there’s a good chance it’s caused by your changing body and not an infection. Per BabyCenter, nasal congestion can be caused by a rise in the levels of estrogen or blood circulation. Either can cause your nasal passages to swell. There are a variety of ways to treat a stuffy nose during pregnancy, but before you try any method of relief, you should talk to your doctor first.

6. Extra Saliva: If you’re drooling like a Saint Bernard, you’re not alone. Nausea, heartburn, and hormone changes are all leading culprits for extra saliva during pregnancy. Some irritants (like second-hand smoke) can cause saliva to build up as well. If you’ve developed a bit of a spitting habit while you’re pregnant, make sure to talk to your doctor about it to get some help in figuring out the cause.

7. Growing Feet: Going up a half to a full shoe size while you’re pregnant is pretty common. For some women, their feet go back to their pre-pregnant size after the baby is born, but for others the change is permanent. Podiatrist Dr. Jane Anderson explains the source of this wardrobe-changing side effect can be either edema (fluid retention and swelling) causing your feet to plump up a bit, or the hormone relaxin, which can loosen the ligaments in your feet, causing the bones to spread.

What pregnancy side effect caught you off guard, and how did you deal? Share with us on Twitter @BritandCo.

Maggie Henderson
Maggie is a content marketing and advertising maven by day and a blogger by night. When she's not window shopping online, you can find her looking for inspiration on Instagram and Pinterest, traveling to new adventures, and chasing after her dog and toddler son.
Healthy Living
Pregnancy
Healthy Living maternity New Moms Womens Health
More From Pregnancy