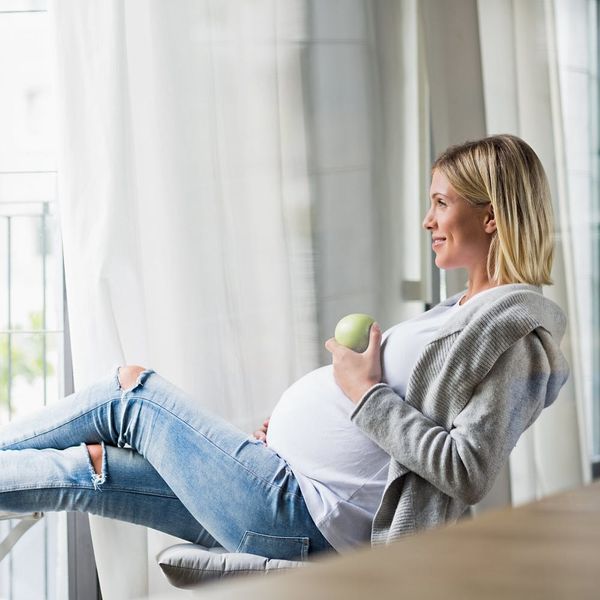 There’s no way around the fact that morning sickness is one of the less glamorous parts of pregnancy. You’re supposed to have that motherly glow, and instead, you’re sweaty and pale from — well, you get the picture. And who named it “morning” sickness, anyway? Your belly is swishing, swaying, churning and turning all day long. If only there were a magic pill you could take to make it all go away. But many meds are out of the question when it comes to your baby-to-be’s health. That’s okay. Check out these totally prescription-free methods to beat morning sickness.

1. Nix the nausea-inducers. You’ve probably already discovered which smells make you run screaming (and heaving). Yes, that’s right — smells. Sometimes it’s not the actual eating that makes you sick: It’s just the scents that turn your tummy. Do everything you can to stay away from them. This may take some rearranging, accommodation and understanding on the part of those around you. Let’s say the fragrant aroma of a thick, juicy steak cooking on the stove once set your taste buds on fire, but now it’s doing the total opposite. Ask your partner to take the meat outdoors for a backyard barbecue until your morning sickness stage has passed.

2. Freeze it. Your drink, that is. Tossing back a tall glass of water, juice or just about anything else used to be super-simple. Now, it’s turned into some sort of twisted task. You know that hydration is an absolute must, especially when you’re losing liquids en masse during your bouts of morning sickness. Even so, you just can’t stomach gulping down anything right now. Turn that liquid in a solid by freezing it! Add a splash of lemon, a hint of cucumber essence or some watermelon juice to your cubes. Sucking on frozen treats is much more palatable than chugging the same amount of liquid would be.

3. Eat more. Even though eating more seems to go against what your stomach is telling you, it isn’t as crazy as it sounds. No one is saying that you need to shovel pancakes, potatoes and double-bacon cheeseburgers down your throat. Instead, nosh on small, carb-happy snacks (such as crackers or toast) throughout the day. Add a pinch of protein — like peanut butter or a small cube of cheese — to round out your between-meal munchies. This keeps the seasick, rocky feeling from taking over completely.

4. Get some ginger, for real. Ginger has been used for centuries to treat nausea — think ginger root, not some manufactured chemical flavoring. If you’re downing cans of ginger ale like a champ, but your morning sickness isn’t getting any better, look at the ingredients. If the soda uses just “ginger flavor,” you won’t see any benefit. You need the real deal. Make sure that the drink, tea, cookie or candy that you choose contains ginger itself and not a list of man-made mimics.

5. Make it minty. The scent perked you up and gave you an over-the-top fresh feeling long before you were pregnant. Now that you’re on a bit of a rocky road, mint can soothe your nausea and take care of that morning-sickness mouth. Infuse your water with mint, try some tea made from the leaves, suck on a candy or simply sniff the fresh-making stuff.

Keep in mind that sometimes morning sickness can get serious. If you’ve tried everything you can think of to beat it back and you’re still feeling nauseated, are vomiting, are losing weight or are dehydrated, call your doctor right away.

Erica Loop
Erica Loop is a freelance writer living in Pittsburgh. When she's not busy creating kids' activities for her blog Mini Monets and Mommies, you can find her trying to hang out with her teenage son, being chased by her two Olde Boston Bulldogs or teaching a children's karate class (she's a third degree black belt!).
Pregnancy
Parenting
Pregnancy
More From Parenting