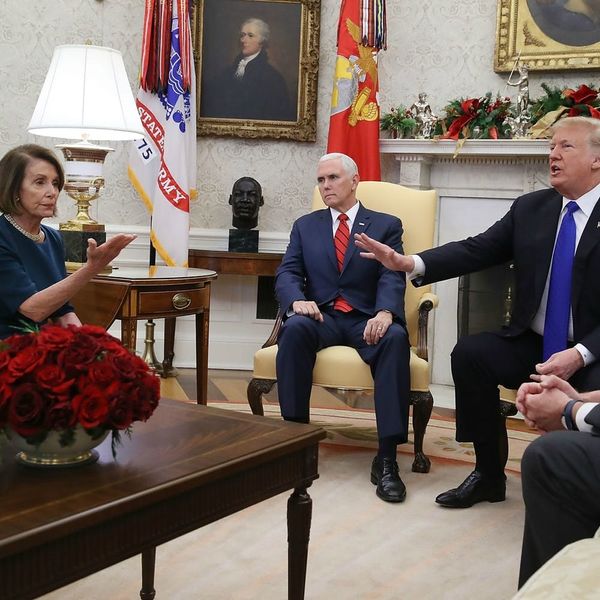 If today’s meeting between President Trump, Democrat House Minority Leader Nancy Pelosi, and Senate Minority Leader Chuck Schumer is any indication, the next two years in Washington will be tense.

The trio met (alongside Vice President Mike Pence) in the Oval Office on Tuesday, December 11. According to reports, the conversation soured almost immediately when — after falsely asserting that large sections of a southern US border wall are already built — the president told the Democrats that if the party did not comply with his request for further funding to build the wall, he would shut down the government.

“I am proud to shut down the government for border security,” the president said during the exchange. “I will be the one to shut it down, I’m not going to blame you for it.” The threat came during the heated 20 minutes of on-camera debate, after which Trump kicked out the media.

“The people of this country don’t want criminals and people that have lots of problems and drugs pouring into this country,” the president said, re-affirming the false belief that immigrants and refugees are dangerous to the general public. Vice President Pence sat in silence for the duration of the exchange.

The bad blood comes from the president’s request for an additional $5 billion in spending to help fortify the southern border while making additions to already-existing portions of fencing and wall that were erected before the 2016 election. Democrats are only willing to agree to about $1.3 billion — and refuse to budge — extending existing funding for the Department of Homeland Security that has already been outlined in previous bills.

After all the bickering over who would pay for the wall and ejecting cameras from the room, Trump reportedly declared that Mexico would pay as part of his renegotiated NAFTA deal. The Mexican government maintains that they will not be funding the wall.