Preventable Diseases Are on the Rise in the US, But Don’t Blame Immigrants 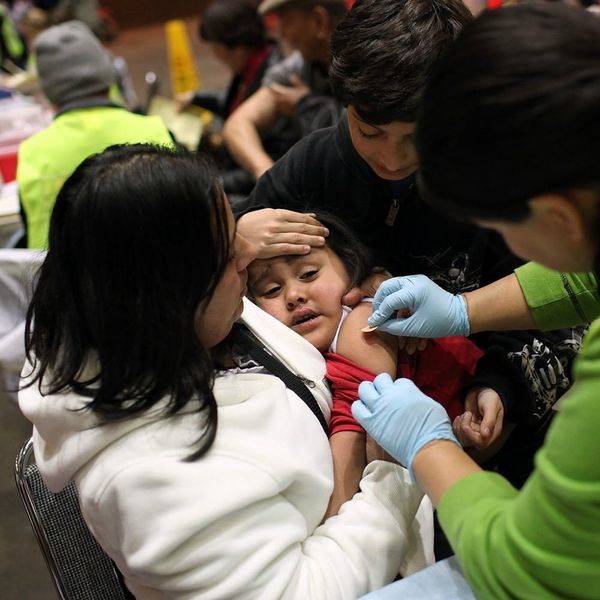 As the caravan of mostly Central American immigrants inches closer to the southern US border, select pundits and political officials continue to frame these individuals as a national threat. One strategy for doing so, put forward by Fox News’ Laura Ingraham and Fox & Friends’ Brian Kilmeade, is that the immigrants pose a health risk to people already living in the US. Ingraham has suggested that members of the caravan might bring diseases “we haven’t had in decades” (a claim that has no evidence to support it). Kilmeade, meanwhile, argued that immigrants were less likely to be immunized than Americans (which also doesn’t stand up to scrutiny).

Racist and dehumanizing efforts to scapegoat immigrants for the spread of sickness are nothing new. But pundits are right to worry about the spread of communicable, yet preventable, disease — and immigrants are not the reason.

As Angela Chen writes in The Verge, “available evidence suggests that when it comes to public health, we have more to worry about from anti-vaxxers than from immigration.”

In the last decade, there has been an uptick in vaccine-preventable disease outbreaks, particularly in states where vaccine exception rates are higher, like Washington state, Utah, and Texas. Since 2010, the CDC reports that nationwide, there have been a total of 1,806 measles cases. For mumps, the number is even higher, with over 3,000 cases reported in one Arkansas community between 2016 and 2017 alone. It is almost certain that these outbreaks could have been better contained and managed if more people were vaccinated.

The choice not to vaccinate across the US continues to gain momentum, even as the overall vaccination rate goes up. According to a 2017 report from the Centers for Disease Control, the rate of non-vaccinated children has quadrupled since 2001. And in a separate study published in PLOS Medicine in June of this year, researchers noted that while a lack of geographic or economic access to health care can contribute to a decline in vaccination rates, urban and rural populations show comparable vaccination declines in states where parents can opt out of vaccines over religious and philosophical beliefs.

The Department of Health and Human Services, meanwhile, vaccinates immigrant children who have crossed the border on foot during a routine health and wellness check, and anyone who has applied for a US visa must submit proof of vaccination to US Citizenship and Immigration. Though refugees and asylum seekers are not technically required to be up to date on vaccinations, the CDC and Department of State developed a vaccination program explicitly for refugees to the US in 2013.

So who, then, is driving the uptick in non-vaccination? Peter Hotez, dean of the National School of Tropical Medicine at the Baylor College of Medicine and one of the researchers in the PLOS Medicine study, told The Washington Post that digging down to county-level data helps us get a clearer picture of areas with high levels of unvaccinated children (or hot spots, as the authors call them).

“[High levels of unvaccinated children] suggest that outbreaks of vaccine-preventable diseases could either originate from or spread rapidly throughout these populations of unimmunized, unprotected children,” the study notes. Alternately, the study found that in states that have banned non-medical exemptions from vaccines — specifically Mississippi, California, and West Virginia — the population tends to have the highest vaccination rates and lowest rates of outbreaks in the country.

But why do parents opt out? Medical exemptions (such as compromised immune system or disease) are actually quite low, usually accounting for less than five percent of the general population. But false fears around “vaccine injuries” such as autism or other neurological conditions remain high among otherwise educated people. In fact, a 2015 public health study noted that those who opt out of vaccinating their children are predominantly white, English speaking, college educated, and covered by private health insurance.

The decision to opt out of vaccination can contribute to a reversal of herd immunity, or the resistance to the spread of a disease within a population due to high vaccination rates within that group. When herd immunity isn’t achieved, preventable diseases like chickenpox or the measles can lead to lifelong negative health outcomes among the most vulnerable members of the community. Among these: stillbirths (particularly among pregnant women who are exposed to chickenpox, which can lead to pneumonia or worse), paralysis, or even death.

Yet, despite the threats, people continue not to vaccinate. Many remain driven by the belief that vaccines can cause developmental delays and disabilities — even though that idea has been thoroughlydebunkedseveral times.

Though immigrant communities aren’t particularly likely to introduce disease to the US, they’re as likely as anyone else to fall victim to a loss of herd immunity from non-vaccination. Last year, the Somali community in Minneapolis, Minnesota, was affected by the state’s worst measles outbreak in three decades, and there is evidence that purposeful spreading of misinformation to the community by anti-vaccine activists greatly contributed to the outbreak.

Minnesota is a state with vaccination exemptions for philosophical, religious, and medical reasons; vaccination rates among its Somali immigrant community have steadily dropped for more than a decade. According to The Washington Post, starting around 2008, members of the Minneapolis Somali population were concerned that children within their community were exhibiting higher rates of Autism Spectrum Disorder (ASD). Some worried that the vaccine for measles, mumps, and rubella (MMR) was to blame. Reports show that Andrew Wakefield — the now discredited and unlicensed former doctor who first claimed autism was linked to the MMR vaccine — gave several talks to the Somali community in Minneapolis between 2008 and 2011 while vaccination rates dropped.

But Minneapolis wasn’t an outlier. In 2014 and 2015, a multi-state measles outbreak started at Disney theme parks, in Orange County, California. Although the CDC believes the outbreak originated from a foreign visitor (most likely from the Philippines as suggested by the type of measles spread through the theme park’s guests), more than 120 people were infected, including 110 from California alone. The CDC reported that almost half of the affected Californians were unvaccinated, with at least 12 of those who contracted the disease under the age when you would normally get a first immunization.

And earlier this month in North Carolina, a private alternative education school made the news when its small student body reported a growing number of chickenpox within its community. In the first half of November alone, cases of the virus tripled from about a dozen to 36 at the Asheville Waldorf School, making it the largest varicella zoster outbreak in the state since vaccines for the virus became available more than 20 years ago.

So how can we change vaccination rates, and lower the spread of deadly diseases? One potential solution lies in California.

In 2015, California banned philosophical exemptions after a study noted an increase, particularly in white, affluent private school children skipping vaccinations. At the time, over three percent of the state’s kindergartners weren’t vaccinated, a three-fold increase from five years earlier. But by 2016, less than one percent of Californian children lived in an area that wasn’t protected by herd immunity, and vaccination rates increased by 20 to 30 percent in some areas thanks to the legal change of who qualified for exemptions.

Kat Armstrong
Kat has been a writer, social media maven and mom for longer than she's willing to admit. She's also spent time in front of and behind the camera, interviewing celebs, politicians and acting as a producer for fashion and artistic photography shoots. When she isn't writing for various orgs and publications, she's hanging with her kids, husband and French Bulldog, Peter, in Toronto, Canada.
Controversy
Womens Health
Controversy Immigration