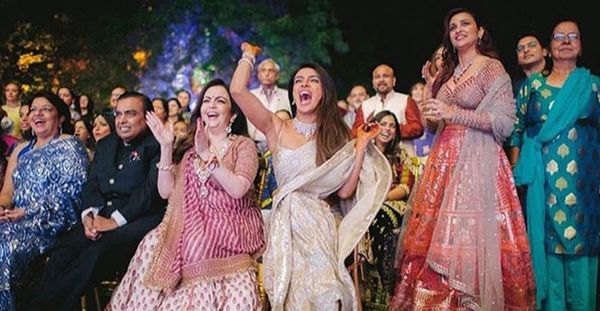 We’d basically sum up Nick Jonas and Priyanka Chopra’s epic wedding weekend into one word: stunning. The famous couple exchanged vows in the first of two ceremonies on Saturday, December 1, at the pink sandstone-and-marble Umaid Bhawan Palace in Rajasthan, India. Chopra wore a pretty multi-colored gown by Abu Jani and Sandeep Khosla. Well, her look at their over-the-top Sangeet ceremony at the Umaid Bhavan Palace is equally as breathtaking.

Chopra shared details of the Sangeet celebration on Instagram, which included photos of her intricate hand-embroidered sequin sari in gold and silver by the same Indian designers. She accessorized with beautiful jewelry of a statement necklace, earrings, and bangles.

Jonas wore a midnight blue sherwanit with silk thread detailing also by the same design team, who conceptualized and visualized the entire event as well. The designers took to Instagram revealing that “millions of fairy lights and mirror installations lit up the Umaid Bhavan grounds to create an enchanted wonderland. It was as if the sky and earth danced as one to celebrate this union.”

It’s reported that Chopra and Jonas wore Ralph Lauren to their other ceremony over the weekend.

What do you think of Priyanka’s look at the Sangeet party? Tweet us @BritandCo.

(Photos via Priyanka Chopra and shot by Joseph Radhik)

Bobby Schuessler
Bobby Schuessler is a contributing fashion writer at Brit + Co and has contributed to Who What Wear, Refinery29, Lucky, Glamour, Out, Nordstrom, and Barneys New York. When he's not writing about style and shopping, you can find him catching up on the latest Housewives franchise and sipping his go-to drink, a vodka martini with a splash of cranberry and a twist.
Celebrity Wedding
Wedding Style
Celebrity Wedding Wedding Style
More From Wedding Style