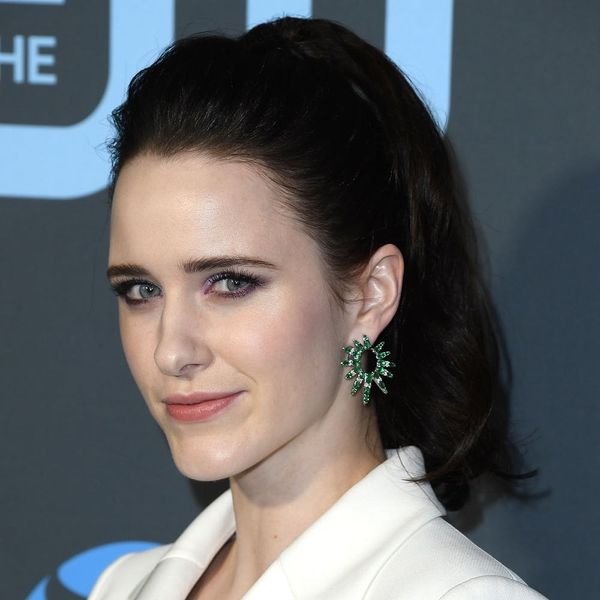 At the 2019 Critics’ Choice Awards on Sunday, January 13th in Los Angeles it’s safe to say that Rachel Brosnahan’s hair and makeup was nothing short of marvelous. The 28-year old star, who won Best Actress in a Comedy Series for her role as Mrs. Maisel in The Marvelous Mrs. Maisel, dominated the red carpet wearing an all-white custom Carolina Herrera power suit paired with strappy Jimmy Choo Kaylee sandals, a pair of eye-catching emerald earrings by Nikos Koulis, a diamond and emerald ring also by Nikos Koulis, and two diamond rings by Ana Khouri. As much as we loved her classic yet feminine #OOTN, it was her hair and makeup (brought to life entirely with drugstore beauty buys) that really caught our attention.

Mara Roszak, the celebrity hairstylist responsible for the ‘do, figured that while updos are par for the red carpet course, a ponytail would better fit the bill for Brosnahan’s CCA debut. “I drew my inspiration from glamorous old Hollywood women, [like] Katherine Hepburn who wore suits in such a beautiful feminine way,” she says. “I decided to create a voluminous ponytail that is always classic and truly complimentary with a tailored suit.”

To get the look, Roszak prepped Brosnahan’s hair with Suave Professionals Firm Control Boosting Mousse ($3), applying it from the roots to the ends. “Reliable volume products such as [this mousse] and setting the hair first ensures a longer lasting style,” she explains. After forming the base, she blow-dryed Brosnahan’s hair with a mid-size boar bristle round brush and set with velcro rollers for volume and texture, letting them sit for about five minutes. Before unraveling, she spritzed all over with Suave Professionals Flexible Control Finishing Hairspray ($3) to help set the curls. After removing the rollers, Roszak brushed through Brosnahan’s hair to prep for the final pony.

If you don’t have the stylist on speed dial, Roszak offers her best advice for those DIY-ers. “To create the perfect ponytail, start by separating a thin section of the hairline all around the face, leaving that out of the ponytail,” Roszak suggests. “Then, gather the hair to the top of the crown, making a high pony and securing with an elastic firmly.” Next, take each side of the separated hair from the hairline, gently tease at the roots, and wrap it around to the ponytail base, concealing the elastic, and secure in place with bobby pins. (Photo via Mara Roszak)

To complete the style, Roszak sprayed another coat of hairspray throughout for long-lasting hold. “Hairspray is key in creating a red carpet style,” she says. “I personally love hairsprays that add hold without the look of being stiff in any way. The suave flexible control finishing hairspray does that. It has a lovely finished sheen and touchable soft hold.”

Brosnahan’s makeup combined glowing, natural-looking skin with a bold lavender eye, brushed brows, and a peachy nude lip. Celebrity makeup artist Lisa Aharon (who was working on behalf of Revlon for the evening) started by blending Revlon PhotoReady Candid Natural Finish Anti-Pollution Foundation in Porcelain ($11) from the center of Brosnahan’s face outward. Next, she concealed the under-eye area and any spots that needed a tad more coverage with the Revlon PhotoReady Candid Antioxidant Concealer in Banana ($7). To set the flawless complexion, she used a light dusting of the Revlon PhotoReady Candid Setting Powder ($10) on the center of Brosnahan’s forehead and face. Aharon topped it off with Revlon Powder Blush in the shade Rosy Rendezvous ($11) on the apples of her cheeks and Revlon PhotoReady Insta- Fix Highlighting Stick in Pink Light ($14) along the highpoint of her cheekbones.

For Brosnahan’s brows, Aharon used Revlon ColorStay Brow Creator in Soft Brown ($13) to help define her arches. “Filling in and sharpening the brows helps to frame the eye and guide where the shadow is placed next,” Aharon says. “Since the suit was clean and white, we decided to have fun with color on the eyes.” Aharon used Revlon ColorStay Crème Eyeshadow in Merlot ($7) to create the base followed by light purple and pink shades from the Revlon Colorstay Looks Book Palette in Insider ($10) to help brighten and add dimension to the ’60s-inspired lid look. She completed the statement eye by intensifying the lash line with Revlon ColorStay Crème Gel Eyeliner in Black ($6) and a few coats of Revlon Volumazing Mascara ($9). “It’s long-lasting, so I can rely on it not to flake or smudge on a red carpet,” Aharon says.

For the finishing touch, Aharon opted for a subtle nude lip. “It’s been very dry in LA so I’ve been reaching for extra moisture wherever I can,” she says. “Revlon Super Lustrous Lipstick ($9) has a rich amount of pigment but also delivers the hydration I needed for Rachel’s lips.” After trying a few lighter shades, Aharon and Brosnahan landed on Bare Affair to round out the A-lister’s mod makeup look. (Photo via Frazer Harrison/ Getty)

Do you love this retro hair and makeup look? Tell us @BritandCo!

Rebecca Norris
Rebecca Norris is the Beauty Editor at Brit + Co. With a New York apartment that looks more like a Sephora than a home, she's just as quick to roll up her sleeves to swatch all the best bold lipsticks, as she is to hop in a dermatologist's chair to review a vampire facial. After all, anything in the name of a good story, right?
Celebrity Beauty
Beauty News
Celebrity Beauty Red Carpet
More From Beauty News