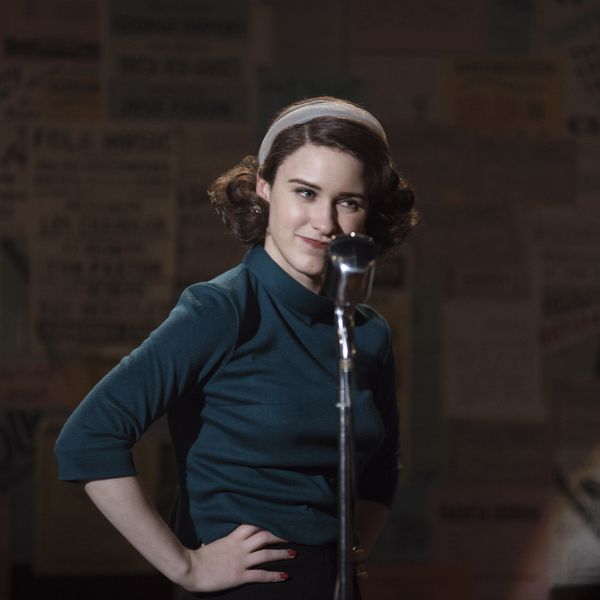 Welcome to Brit + Co's Binge-Worthy Bulletin, a series where we choose one show we're obsessed with and tell you all the reasons why. This week's pick is The Marvelous Mrs. Maisel, which returns for a second season on December 5 on Amazon. Miriam "Midge" Maisel (Rachel Brosnahan) is an upper-middle-class, by-the-book, 1950s Jewish housewife whose life is turned upside down when her husband (Michael Zegen) admits his infidelity and leaves. So, she does what any reasonable woman in her situation would do: She gets drunk and storms the stage at the café where her husband has been trying — and failing — to get a stand-up career going, proving herself not only more than just a dutiful wife, but also a true comedic force. Click through to see some of the many, many reasons we love her (and the show). (Photos via Kevin Winter/Getty Images + Amazon Prime Video + Amanda Edwards/Getty Images)

The leading lady: Miriam "Midge" Maisel is a fast-talking, whip-smart, witty woman who, despite the sexist limitations of her era (the late '50s), pursues her newfound comedy passion — and doesn't bother minding her language while she's at it. The character is brought to shimmering life by Rachel Brosnahan, whose warmth and charm are impossible not to love. (Photo via Amazon Prime Video)

The friendship between Midge and Susie: Before Midge's husband left her, she had been spending late nights attending his fledgling stand-up sets at the Gaslight Café (even bribing the owner with homemade brisket to secure her husband a spot). It's there that she meets Susie (Alex Borstein), an employee who recognizes Midge's own comedic talents and sets out to help her launch a career. Despite their differences, the pair become unlikely friends, building something special on a foundation of respect, trust, and (not always spoken) admiration. (Photo via Amazon Prime Video)

Amy Sherman-Palladino's unmistakable magic touch: She created Gilmore Girls — what more do we need to say? Everything Amy Sherman-Palladino creates is unmistakably hers. Not only is the dialogue quick and sharp enough to keep you on your toes (and smiling), but women are always front and center, and Sherman-Palladino imbues their personalities and relationships with the same intensity and complexity we experience in real life. Which brings us to the next slide… (Photo via Kevin Winter/Getty Images)

Its portrayal of multi-dimensional women: Midge, her mother, her friends from work, and her manager, Susie, are all very different, with their own unique quirks and passions and flaws. They're also women of a certain era, so we get to see how they fit (or don't fit) into the roles society has chosen for them, and the difficulties they face along the way. (Photo via Amazon Prime Video)

It gives women a voice in an era when they didn't always have one: Midcentury women were largely expected to tend to the home, the children, and their husbands, and while Midge fulfills those expectations, she also creates a life for herself outside of her apartment. She has a distinct point of view, and she's not shy about sharing it, whether she's on stage at a comedy club, charming guests at a party, or giving a rousing speech to protesters at Washington Square Park. (Photo via Amazon Prime Video)

That WARDROBE: Costume designer Donna Zakowska deserves all the praise for the colorful, impeccably tailored dresses, overcoats, and accessories that make Midge one of the most vividly and enviably dressed women on TV. Add in a dash of retro fashion envy, and even if no one on the show ever spoke a word, it'd be worth watching for the clothes alone. (Photo via Amazon Prime Video)

It pays homage to some of the all-time comedy greats: While Midge isn't necessarily based on any single comedian, Brosnahan has said she drew inspiration from watching comedy legends such as Joan Rivers and Phyllis Diller, two outspoken and hilarious women who helped define comedy around the time Mrs. Maisel takes place. And Sherman-Palladino is the daughter of the late comedian Don Sherman, who was a stand-up comic and writer in the '50s and '60s. Midge also befriends real-life comedy legend Lenny Bruce, played on the show by Luke Kirby. (Photo via Amazon Prime Video)

Its multiple award wins felt monumental: The Marvelous Mrs. Maisel cleaned up at both the 2018 Primetime Emmys and Golden Globes. Sherman-Palladino became the first woman to win Emmys for comedy writing and directing, and the show's overall dominance on the awards circuit showed that comedy by and about women can be lighthearted and fun and still worthy of prestigious acknowledgement. (Photo via Rich Fury/Getty Images)