Rainbow Bagels Have a Colorful History 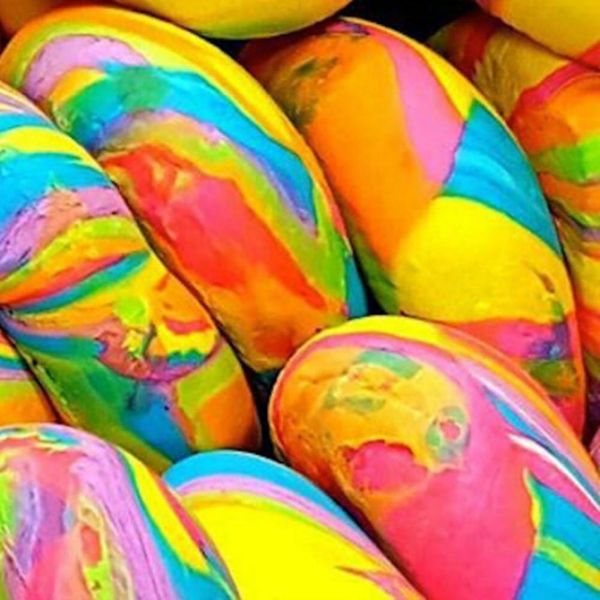 Bagels are a quintessential New York food with a colorful history — and growing all the more colorful every day. According to Maria Balinska’s book The Bagel: The Surprising History of a Modest Bread, bagels started in Krakow, Poland in the 1600s and made their way to New York with Jewish immigrants via Ellis Island. There have been bagels in New York City as long as there have been delis on the lower east side, with the first bagel baker union forming in 1907. Through the years the look has remained pretty much the same — a round of dough with a trademark hole in the middle, which was originally used for stringing the bagels with rope or a pole before dipping the dough into vats of boiling water prior to baking. It is only in very recent years that Bagels have gone all rainbow bright.

The rainbow bagel is said to be the invention of Scot Rossillo, self-described “World’s Premier Bagel Artist.” Scott grew up in Brooklyn behind a bagel store, eventually working in the store and perfecting his bagel-making craft. His shop The Bagel Store in the Williamsburg section of Brooklyn is best known for rainbow-swirled bagels, which Scott says he has been baking for 20 years. It is only in recent years that the colorful breakfast bread took off on social media. In Scott’s shop you can order your bagel topped with custom cream cheese mixes, such as “Birthday Cake” or “Cannoli.”

Scott’s bagels have become the favorite of Instagrammers, due to the photogenic quality of their neon-bright hues.

(Photo via The Bagel Store)

From Your Site Articles
Sally Jones
Sally Jones is a writer and editor living in New York City. She has worked at many websites including iVillage, Ladies Home Journal, More, Parenting, Cosmopolitan, The Knot and YourTango, in jobs ranging from editor to COO. Renovation and interior design are her unhealthy obsessions hobbies. She has renovated every home she's lived in, including the rentals, and like... whoa, who does that? You can catch her at her blog Renov8or.
Home News