Rainbow Bagels + 12 Other Reasons to Carb the Rainbow 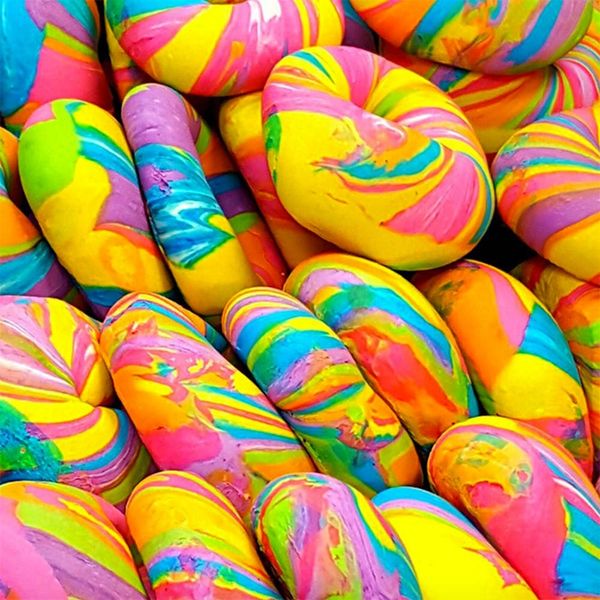 First there was fairy bread, then there was cloud bread. What comes next? How can bread get even better than before? Rainbows, DUH! Starting with the coveted works of art hailing from Brooklyn's The Bagel Store (seriously, models pose with their bagels as accessories for Instagram photos), we're doing a few laps around rainbow food road. These 13 rainbow carbs you don't need but *definitely* want are simply impossible to resist.

You won't want to miss out on this colorful, tasty and straight-up magical breakfast. (via The Bagel Store)

Don't worry non-New Yorkers. Magic is mailable. Once these beauts cease breaking the Internet, you can order a baker's dozen and whip up some funfetti cream cheese to stuff inside the rainbow. (via Studio DIY)

Patience is a virtue, but some virtues are worth ditching when it comes to a rainbow slathered in full-fat schmear. So get ready to roll up your sleeves and start kneading. (via What Jew Wanna Eat)

Turns out rainbow bagels are just the first stop in our quest for rainbow carbs. But we won't leave you drooling for long! Rainbow donuts are just as Instaworthy. (via Just Baked)

Pastel rainbow donuts make the base for these Valentine's Day treats. These might just be unicorn essence in food form. (via Aww, Sam)

Equally dividing dough into seven bowls, adding ROYGBIV food dye in the right proportions, struggling to get the rainbow look on point: Carb rainbows are a workout! Focus on the icing for a little less work and just as much of a WOW factor. (via Eugenie Kitchen)

Vegan, check. Gluten-free, check. Rainbow, check. These donuts are easy to make since they're simply a stacked rainbow versus a rainbow-in-one, but they will still be the hit of any breakfast table. (via Fork & Beans)

Moving on to the next category of rainbow rounds is this rainbow bundt cake. No you did not ingest hallucinogens. This cake is actually that colorful. (via Just a Taste)

Sure you've seen rainbow layer cakes but this take on making rainbows delicious is so brilliant. Dessert has never been quite so pretty has it? (via Tablespoon)

If you can't get a bagel for breakfast, why not try another Jewish delicacy in rainbow carb form? This rainbow challah is braided perfection. (via What Jew Wanna Eat)

How could we not include rainbow cookies dipped in rainbow sprinkles? That sugar spike you'll inevitably feel will taste amazing. (via Tablespoon)

Rainbow on the inside. Rainbow on the outside. It's a recipe for colorful success and perfect for that birthday you've been planning. (via Brit + Co)

Who doesn't want stacks on stacks? Start your morning with the glory of the rainbow with a ROYGBIV short stack. (via I am Baker)