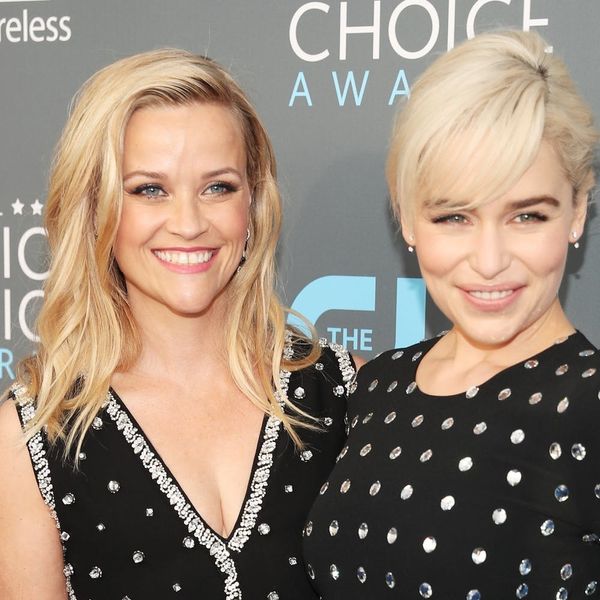 Move over, Ava Phillippe — Reese Witherspoon has a NEW twin!

The Critics’ Choice Awards happened Thursday night, and while there was plenty of bright, bold fashion to behold (did you SEE Sarah Hyland’s tutu?!), there was one style moment you may have missed — and an epic one, to be sure.

While posing on the blue carpet (yes, blue!) Witherspoon happened upon the Mother of Dragons herself, Emilia Clarke, who just so happened to be donning a very similar look to her own.

Though their LBDs were from different designers, with the Home Again star clad in Prada and the Game of Thrones actress in Dolce & Gabbana, the parallels to their stunning looks were striking.

Both dresses featured a black base with mod, studded silver circles, accented by their matching blonde ‘dos. Though the TIME’S UP activist keep her tresses long and flowing and the RL Daenerys Targaryen swept hers up in an Edie Sedgwick-inspired updo, the overall effect was enough to have us — and the rest of the internet, apparently — swooning. Talk about a power couple!

This makes it official: Everything really IS better in pairs.

What do you think of the ladies’ matching looks? Share with us over @BritandCo.

Nicole Briese
Nicole is the weekend editor for Brit + Co who loves bringing you all the latest buzz. When she's not busy typing away into the wee hours, you can usually find her canoodling with her fur babies, rooting around in a bookstore, or rocking out at a concert of some sort (Guns N' Roses forever!). Check out all her latest musings and past work at nicolebjean.com.
Celebrity Style
Red Carpet
Celebrity Style Dresses Red Carpet Reese Witherspoon