This Is the Dangerous Condition You Can Get from Spin Class 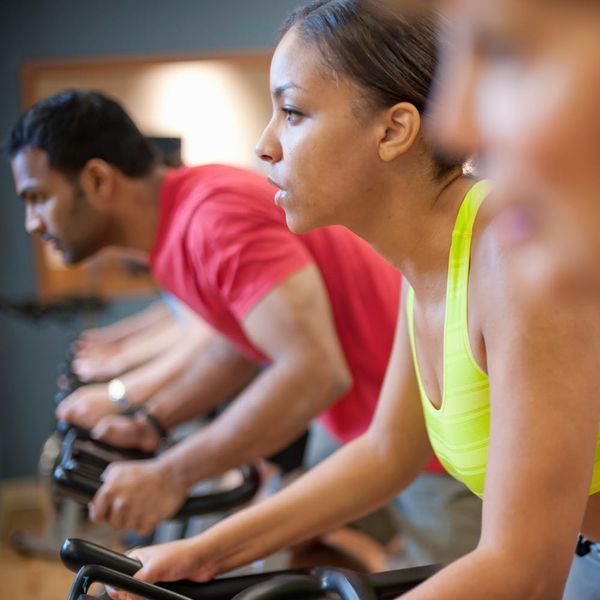 With a cult-like following among city dwellers and a rep for bringing you both spiritual enlightenment and the best butt of your life, it’s easy to understand why so many people are jumping on a spin bike, enthusiastic to finally experience those intoxicating endorphins for themselves. But with such a high-intensity workout comes a higher chance of doing something wrong — and either hindering yourself from its full benefits or seriously hurting yourself. In fact, both spin class and CrossFit (two seriously intense and majorly trendy workouts) have been linked to Rhabdomyolysis (“rhabdo” for short), a potentially life-threatening condition that occurs when your muscles break down and release toxins into your bloodstream. While it’s not super common, it’s still important to understand, especially if you’re considering taking a spin class for the first time. So before you start making the most of that ClassPass membership, be sure to read on for Dr. Jacqueline DuBose’s explanation of rhabdo, what you can do to prevent it, and what signs to look for if you think you might have it. As always, if you have an immediate medical concern, please seek professional help immediately!

B+C: How does a person get it?

JDB: This usually occurs in skeletal muscle injuries, such as crush injuries in an automobile accident, or large, deep burns from a fire. Certain medications can also cause rhabdomyolysis. Less frequently, we see it resulting from intense, prolonged exercise. The typical case of rhabdo in this circumstance used to be an untrained military recruit; however, we are seeing it more in the general population. While it’s still considered rare, the recent surge in popularity of high-intensity interval training (HIIT) has certainly contributed to the rise in ER visits for rhabdomyolysis.

B+C: How can you prevent it?

JDB: Of the documented cases resulting from spinning, the vast majority occurred after the first class. Newbies should start slow, and gradually increase the intensity and duration of exercise over several weeks. Consider limiting the first spin to 15 minutes, then see how you feel over the next two days. Drinking water before, during, and after the session will help keep the kidneys working properly. Adequate rest between vigorous exercise sessions is also critical for muscle recovery. Just to be on the safe side, do not use non-steroidal anti-inflammatory medications like ibuprofen or naproxen after a vigorous workout, as these put additional stress on the kidneys.

B+C: What are the telltale signs and symptoms?

JDB: Symptoms of rhabdomyolysis vary from person to person. For many, the first sign may come during exercise, with a feeling of tightness and fatigue. Muscle pain is usually progressive over the next 12-48 hours, much worse than the typical muscle soreness of a good workout. The quadriceps (thigh muscles) are especially prone to swelling, and it may become difficult to bend the knees or walk. In many cases, urine may turn dark or tea-colored, as the kidneys attempt to clear the proteins.

B+C: What can happen to someone who has it?

JDB: Rhabdomyolysis can be life-threatening. If you think you have it, it’s imperative to seek medical attention early to avoid kidney and muscle complications, or even death. In most cases, rhabdomyolysis can be successfully treated in the hospital with a few days of intravenous fluids and rest, followed by more oral hydration and rest at home. Delaying care can result in kidney damage requiring dialysis, or permanent muscle damage from compartment syndrome, a condition in which the swelling is so extreme, the muscle tissue starts to die.

B+C: Should we be worried?

JDB: A common-sense approach is key to preventing rhabdomyolysis. Fear of developing rhabdo should not deter you from starting an exercise program, but you should be aware of the risks!

How do you make sure you’re working out properly? Tweet us @BritandCo and let us know what you do to stay safe at spin!