This New Rideshare App Is like Uber for You + Your Coworkers 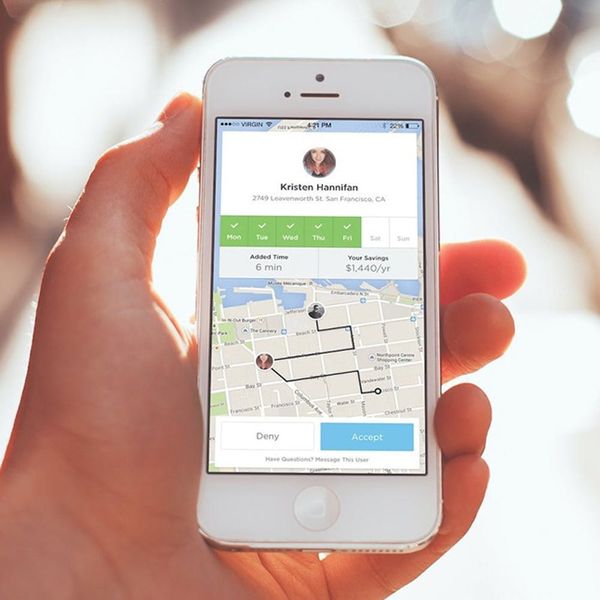 Morning commutes can be super stressful. From the rush of getting out the door with your kids to your partner or even your pet nagging you to the jam-packed streets or public transit, the journey to the office wears you out before you even truly begin the day. Even if you indulged in that double shot espresso. Now there’s a newcomer joining the route to work, and it’s looking to reinvent the commute via ridesharing.

Ride is a ridesharing service that matches you with your carpooling coworkers to create an efficient and money-saving way to get to work. This new carpooling option — which launched this week for businesses throughout the US on iOS devices — has the backing of Uber’s former chief technology officer, Oscar Salazar. So, we’re expecting this to blow up in 3, 2, 1…

What makes Ride different from other rideshare apps like Lyft and Uber is that everyone hopping in the car is a co-worker, not a complete stranger. Yep, even the driver. After downloading the app and registering, you indicate whether you want to be a passenger or a driver. Then, after finalizing the process — entering your address, your office, your typical commuting days and times, etc. — Ride uses its algorithm to create carpools with your office mates by planning the most efficient routes for your team. Additional features include payment management within the app — no awkward money exchanges! — and a group chat so you can gossip with your cubicle buddies about Scandal or let ’em know you’re running five minutes behind. Or if it happens to be Friday and you want to treat your crew, you can send them a note that you picked up some coffee and bagels ;)

Not only is there no strange driver (or passengers) with Ride, but the one behind the wheel doesn’t technically get paid, either. Every ride’s cost is determined depending on gas prices and the distance of the trip. Once complete, passengers pay within the app to reimburse the driver for the ride/gas.

While carpooling is great for the environment — fewer cars on the road = less gas — the options are starting to become just as jam-packed as rush hour traffic. There are shared route options like Carma, Duet, Carpooling and Spaceship that help fill up empty seats on similar work routes to allow business commuters to hop in the HOV lane. There are also outlets for busy parents and their kids to make getting to practice and recital easier, like Shuddle and Carpool-Kids. KangaDo acts as a one-stop shop for rideshares and outlets for playdates. With an ex-Uber employee in the driver’s seat and a user experience mirroring that of the rideshare apps you’ve gotten used to using, we can see this one pulling ahead as a couple of the others run out of gas.

Will you be using Ride or do you use other carpooling apps for your commute? Let us know in the comments.