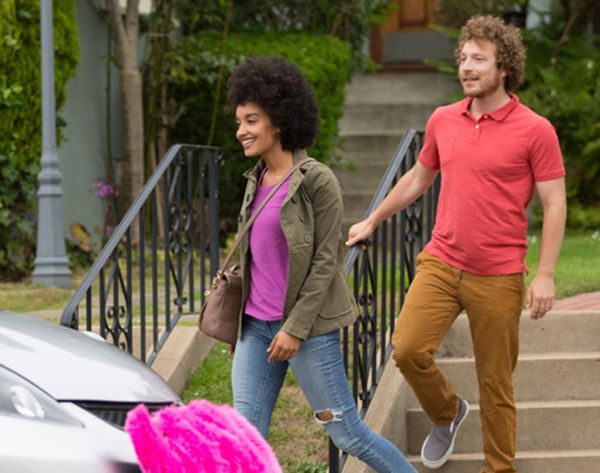 We thought Twitter and Facebook were the most fun-to-follow frenemy pairing in all of the techy, Glass wearing, wearable blogging land, but that was before Uber and Lyft were making out with each other’s significant others under the bleachers and #sorrynotsorry-ing their way around town. Just a few hours after the Internet shared the news of Uber’s new carpooling plan, Lyft pointed out that they had a similar launch, which had been in the works for quite some time. Cheers to these engineer teams — hope you guys + gals are getting some much-needed sleep right about now…

We’re absolutely okay with some friendly competition when we get to reap the benefits of a cheaper, more environmentally ride from A to B. Uber’s new carpooling option is called UberPool and it works to match you with another person who is requesting a ride along a similar route as you. Supposedly when you use the option, you still get your car in the same amount of time. Just now they’re hoping to hook you up with a co-rider. And if they can’t? Uber says they’ll offer you a discount on the ride if they don’t find a match for you.

You’ve already been able to use the app to split a fare with a friend you’re riding with, but this brings us back to our community roots with crowdsourcing that Uber suggests will add up to savings that make taking a cab cheaper than owning a car.

Besides fist bumping and the joy of riding passenger side in a whip with a pink mustache on the front, Lyft is now offering riders the option to buddy up with the launch of Lyft Line. Their service works the same way as UberPool does (or will?): Set your destination and they will connect you with a trip already en route. The company says that 90% of Lyft rides have someone else taking the same trip within five minutes anyway, but have they figured out who gets to dib shotgun?

While this seems like an obvious road for the lighter-hearted Lyft to go down, it is a totally new social step for Uber (originally pitched as your own personal private car service, ‘member?). Lyft Line is launching first on iOS in San Francisco with Android and other cities to follow, while you might have to wait longer for UberPool, which is rolling out now in private beta with plans to expand by August 15.

Are you faithful to Uber or Lyft or more of a taxi taker? Will you try carpooling the next time you hitch a ride? Sound off below!

Lisa Raphael
In her past professional lives, Lisa has served the masses as the Editorial Director at Brit + Co, Bieber Whisperer at J-14, Golden Girls Fan Club Prez at Lifetime and Talk Show Host Understudy to Katie Couric. Now, she's taking on the sports world at The Relish, teaching Hairography 101 in her spare time and will forever be trying to fill the hole Zayn Malik left in her heart.
Apps
Tech
Apps