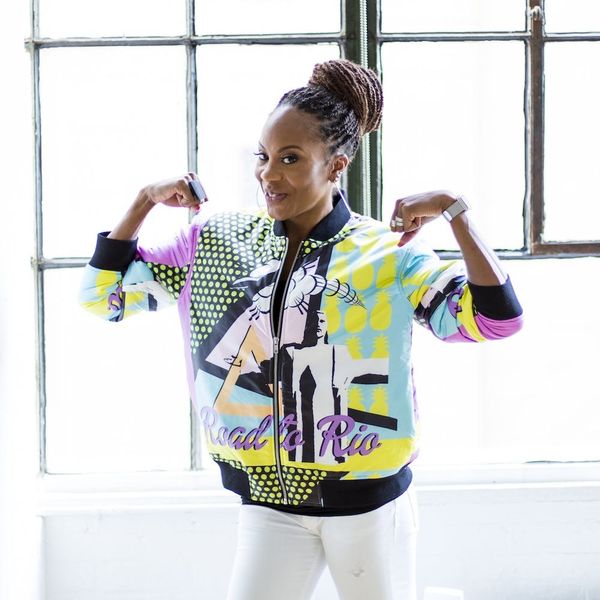 Sanya Richards-Ross has already had a fantastic career. She’s a four-time Olympic gold medalist, and though she’s now retired from running in an Olympic capacity, she’s headed to Rio 2016 as a commentator for NBC — and we couldn’t be happier to hear what she has to say about the games. In the meantime, we also got to talk to her about how she finds motivation to run, and while she says that she is super self-motivated (as you must be to be an Olympian. Duh.) and usually is able to just get up and do it (we wish that could be all of us!), she gave us a few really great tips to get us off the couch and headed toward our goals.

1. Make a really great playlist. Richards-Ross says she’s basically been listening to Lemonade since Beyoncé dropped the hour-long video on HBO, and who could blame her? She also listens to Rihanna, Drake, gospel music and hip-hop. “It’s all about my mood and whatever I need to get me through my run.”

2. Get some gear that makes you feel cute. She says that if you wanna forget you’re running, one of the best things you can do is make yourself look cute (and if her recent athleisure collab with Nike is any indication, she pulls that ish off). Also: She likes to match her sports bra to her running tights. “If you feel good, and you look good, then you run good.”

4. It’s okay to take it easy. Sometimes. “I really had to start listening to my body. There would be times I had to take a day off because I didn’t recover as much from a hard session as I did when I was 18, 19 or 20.” So, don’t be too hard on yourself when you’re too sore for a run. Take a breather, then keep going. You can do it!

Do YOU have any tips on how to get yourself running? Tweet us @BritandCo!

Rosemary Donahue
Freelance Editor at Brit + Co. Freelance writer everywhere. I like my dogs more than I like most people.
Olympics
Health
Olympics
More From Health