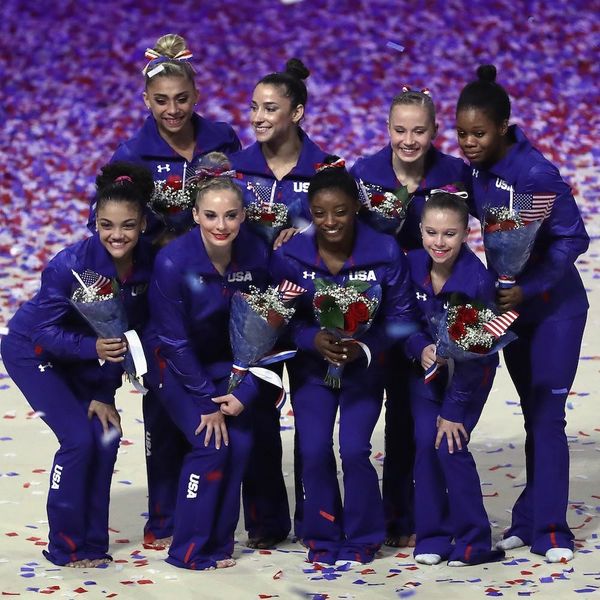 After two days of grueling trials at San Jose’s SAP Center in California, the US Women’s Olympic Gymnastics Team was announced yesterday — and boy oh boy, do we have a killer squad this year. In case you missed it, the group is comprised of: 20-year-old Gabby Douglas, one of the Fierce Five from the 2012 Summer Olympics; 22-year-old Aly Raisman, also a 2012 Fierce Five alum; 19-year-old Simone Biles, Olympic trials winner; 16-year-old Laurie Hernandez, the youngest of the group and the first Latina gymnast to participate on the US Olympic Team since 2004; and 19-year-old Madison Kocian, who specializes in uneven bars. The three replacement athletes for the women’s team include Ashton Locklear, MyKayla Skinner and Ragan Smith.

And while there can only be so many ladies on the team, every gymnast who participated (and vied for the right to wear the 2016 Olympic uniform) is a champ in our books. We got up close and personal with some of these pro athletes to pick their brains about what exactly an Olympic-level gymnast carries in her bag, as well as tips and tricks to stay polished — even when they’re sweatin’.

The 19-year-old gymnast hails from Gilbert, Arizona and has been in the game for 14 years. Whoa. Needless to say, the 2016 Women’s Gymnastics Olympic Team replacement is quite a pro. “I always have to have water, my grip bag and definitely my phone, and I always carry makeup in case I have to do a little fix up.” The product she can’t live without? “You always have to have your lipstick. I like MAC lipstick, depending on the color of my [outfit].” To keep her makeup from sliding off her face under the lights, MyKayla’s trick is “a concealer spray you can use.” As for her hair, she likes to keep it simple. “I sometimes use hairspray and carry a couple extra hair ties.” (Photo via Ezra Shaw/Getty)

17-year-old Emily Schild has been doing gymnastics since she was two-and-a-half, “so, quite a while,” she says with a laugh. She also reveals that the training sched for a pro-gymnast is no joke! “I’m always training year-round. We go Monday through Saturday at the gym. Sunday, we have a day off, and I usually just relax and have fun.” In her bag, she says, “I carry everything I need. I carry my grips, my roller, thera band.” Emily, a fan of glittery eyeshadow (a girl after our own heart!), swears by the Urban Decay Naked Palette, and to tame her flyaways, she sticks to “hairspray and a little gel.” (Photo via Dilip Vishwanat/Getty)

18-year-old Amelia’s advice to aspiring gymnasts is clear cut: “If you really love the sport and you really want to work toward something, it’s intense, but it teaches you a lot of life lessons. It’s worth it in the long run.” In her bag, the Cincinnati native always has her “grips, lots of tape, my water and scissors.” Scissors, eh? “[It’s] for my tape, and I’m really particular because everyone always tries to steal my scissors, and I’m like, ‘No! They’re MY scissors!'” We’re certain Amelia will be sporting lots of KT Tape’s Team USA tape, as the company is the US Olympics’ official supplier. (Photo via Dilip Vishwanat/Getty)

“I started gymnastics when I was 18 months in a parent-taught class, and I really have just been doing it ever since,” Brenna tells us. In her bag? “I obviously carry my grips and wrist guards that I need for each competition and lots of tape. Sometimes, my sisters will write me letters before the meet, and I’ll bring those with me and read them. It’s just a little close to home and it’s really nice.” Despite being part of the gold medal-winning US team for the 2015 World Artistic Gymnastics Championships, the 20-year-old is modest as ever. “My advice is to always just keep working hard. I was never the most talented, but I came into the gym every day, pushed myself and set new goals to learn new skills and it really paid off to think that little girl in a parent-taught class is here at the Olympic trials.” (Photo via Ezra Shaw/Getty)

In her gym bag, the 13-year gymnastic veteran tells us, “I always have my grips, pre-wrap tape, my wrist guards and my band to stretch my shoulders. I usually have my inhaler for my asthma, a water bottle, Ibuprofen and my floor music.” As for when she’s sweating through her makeup, she carries a towel. “I just kind of pat around it,” she laughs. “And hope that it stays on.” For her hair, however, it’s not quite as casual. “A lot of hair spray,” she says. “I usually use TRESemmé as a good go-to.” (Photo via Ezra Shaw/Getty)

“Not a lot of people get this experience, so I just want to have fun,” Maggie Nichols tells us. The things she always has in her bag: “My grips, Tiger Paws, some tape, headphones and gum.” Minty fresh breath is always a win! To get her head into the game, Maggie likes music — but she’s not picky. “A little bit of everything. I like country, hip hop — anything that’ll get me pumped up for the meet!” (Photo via Ronald Martinez/Getty)

Will you try any of these tips? Tweet us @BritandCo!

Kimberly Wang
Kimberly Wang writes about all things pop culture, tech, style, and beauty. She's a Bay Area transplant and has an MFA in Creative Writing from Columbia University. On a sunny New York day, you can find her hanging out with her mini schnauzer Isabelle Jellybean on a blanket in Central Park.
Beauty Hack
Pop Culture
Beauty Hack Olympics
More From Pop Culture