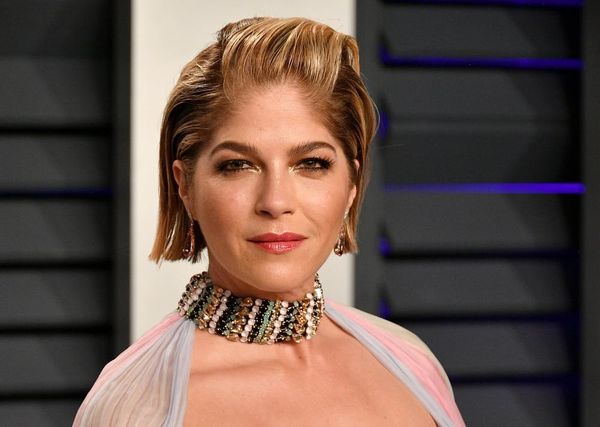 On Sunday, February 24, Selma Blair posed for photos at the Vanity Fair Oscars afterparty, her first red carpet event since she revealed in October 2018 that she has multiple sclerosis. Now she’s tackling another first: her first televised interview since the diagnosis.

In the interview, which was filmed a few days before the Oscars but aired Tuesday, February 26, Blair opens up to Good Morning America‘s Robin Roberts about how she’s doing and how her life has changed over the last several months.

.@ABC NEWS EXCLUSIVE: @SelmaBlair speaks with @RobinRoberts about her MS diagnosis, “I was giving it everything to seem normal.” https://t.co/W1vUNMab63 pic.twitter.com/i17QbcHtRD

“I am doing very well,” she told Roberts. “I am very happy to see you, being able to just put out what being in the middle of an aggressive form of multiple sclerosis is like. So my speech, as you’ll notice — I have spasmodic dysphonia right now. … It is interesting to be here to say this is what my particular case looks like right now.”

The actress also opened up about receiving her MS diagnosis. “I cried. I had tears,” she shared. “They weren’t tears of panic, they were tears of knowing I now had to give in to a body that had loss of control. And there was some relief in that. Because ever since my son was born, I was in an MS flare-up and didn’t know. And I was giving it everything to seem normal.”

That meant “self-medicating” whenever she wasn’t with her son Arthur, now 7. “There were times when I couldn’t take it and I was really struggling with, ‘How am I going to get by in life?'” she said.

For a long time, she added, she was “not taken seriously by doctors,” who told her she was just exhausted from being a single mother. “I dropped my son off at school a mile away and before I got home I’d have to pull over and take a nap,” she recalled. “I was ashamed. I was doing the best I could, and I was a great mother, but it was killing me.”

That’s why, when she finally got the diagnosis, she “cried with some relief” — because she finally had an explanation.

Prior to that, though, the Legally Blonde actress sought advice from Michael J. Fox, who has Parkinson’s. “I said, ‘I don’t know who to tell, I’m dropping things, I’m doing strange things,'” she told Roberts. “He got in touch with me. … He gives me hope.”

Blair has also found hope in her son. Although he was scared when she first told him — the actress recalled how “he almost cried and said, ‘Will it kill you?'” — he “gets it” now, and Blair has learned “not to feel guilty” when she needs to just “get in bed and [not] move.”

That said, Blair admitted that she was “scared of talking” for the interview but that she hopes her effort brings awareness to MS. “No one has the energy to talk when they’re in a flare-up, but I do because I love a camera,” she quipped.