This Is the Engagement Trend You Did NOT See Coming 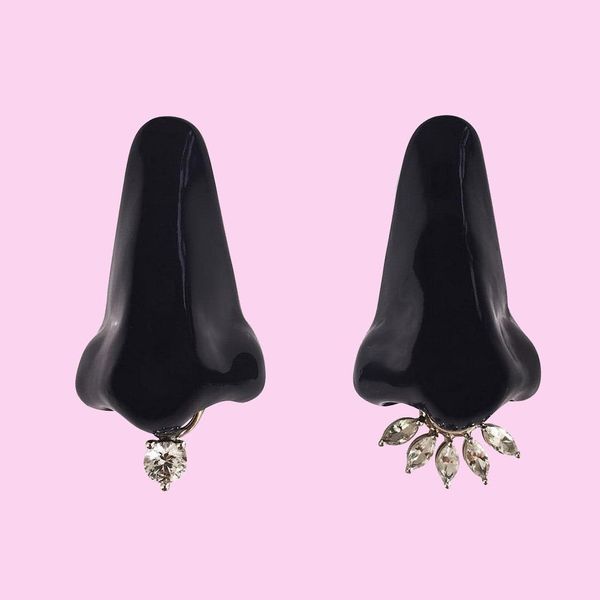 Picture this: your dreamboat of a man gets down on one knee to pop the question and opens a little velvet box to reveal not a diamond ring for your finger, but rather one for your nose. Are you into it? If so, this could very well be a reality for brides who prefer a more unconventional kind of ring. Italian jewelry artist Delfina Delettrez has created a collection of septum engagement rings (which she’s aptly named “She Nose What She Wants”) that’s causing all kinds of commotion on the Internet.

While they’re certainly unconventional, there’s no denying that they’re also super beautiful. For a flashier pick, there is an option with diamonds arranged in a fan shape under the nose. If you’re into something a little more subtle, there’s also a style featuring a simple drop diamond.

While we could totally see someone like FKA Twigs or Rihanna rocking one of Delettrez’s creations, the longevity of the look is definitely something to take into account. Will you still want to rock this marital milestone when you’re 80? Maybe, maybe not. Piggybacking on Delettrez’s brainstorm, this unconventional style has us thinking: What if the importance was placed on the stones rather than the actual piece of jewelry? Could you then wear them as a septum ring for a while, then a bracelet, then a ring later in life? We’re into it.

Would you ever rock a septum engagement ring? Share with us in the comments below.

Cortney Clift
Cortney is the senior writer and special projects editor at Brit + Co. She typically covers topics related to women's issues, politics, and lifestyle. When she's not buried behind her computer you'll find her exploring New York City or planning her next big adventure.
Wedding Style
More From Wedding Style