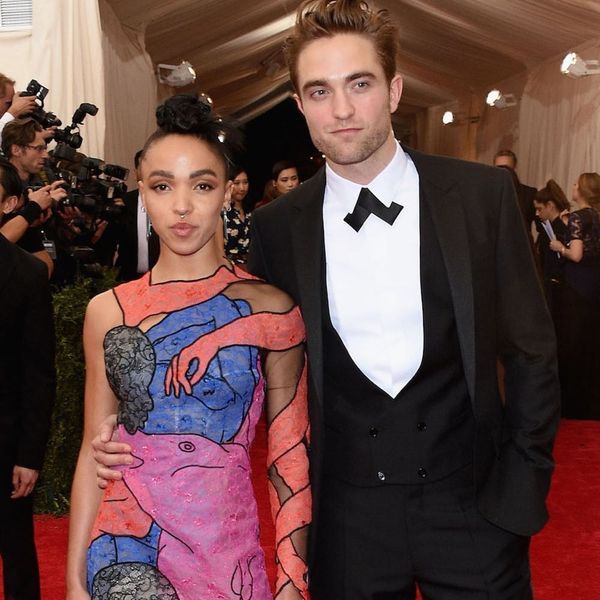 There were a handful of ladies whose Met Gala ensembles made waves earlier this week. Of course Rihanna’s dress and Beyoncé’s see-through number were two instant hits, but FKA Twig’s Christopher Kane dress was also a definite conversation piece. The multi-colored getup with arms, legs and maybe some uh… other body parts embroidered into it was an unusual pick for sure, but it wasn’t a total shocker considering the musician is known for pushing the boundaries with her sense of style. All the commotion over her dress distracted us from one major detail: that stunner of an engagement ring!

Rumors began flying back in April that the 27-year-old British singer and Robert Pattinson were engaged, but the two had yet to officially confirm anything – until now. The duo seemed to quietly make their commitment public on Monday as they cozied up to one another on the Met Gala’s red carpet with the ring fully on show. No specs have been released regarding the diamond and, considering he couple’s low-key vibe, we’re guessing it’s likely to remain a mystery.

Lady Gaga and Nicki Minaj also recently showed off alternative engagement rings, but both of theirs are super showy (not to mention insanely expensive). What we love about FKA Twig’s diamond is that while it strays away from the classic engagement shapes, it’s still relatively subtle and delicate. If you’re totally smitten with FKA’s pick, here are five other rings that offer up a similar feel.

1. Yellow Gold Tiara Ring ($4,650): This ring mimics the shape of FKA’s almost to a tee, but incorporates a gold setting as opposed to her all-platinum pick.

2. The Connemara Ring ($3,070): Add a little bit more movement with this option that features both a silver AND gold setting.

5. The Atlin Ring ($3,070): If you like the alternative style but want something a little smaller, here’s a ring that is just that but still packs a big punch by featuring an unexpected pearl.

What are your thoughts on FKA Twig’s engagement ring? Share with us in the comments below.

Cortney Clift
Cortney is the senior writer and special projects editor at Brit + Co. She typically covers topics related to women's issues, politics, and lifestyle. When she's not buried behind her computer you'll find her exploring New York City or planning her next big adventure.
Engagement
Fashion
Engagement