The Most Shocking, Emotional 'Bachelor' and 'Bachelorette' Finales Ever 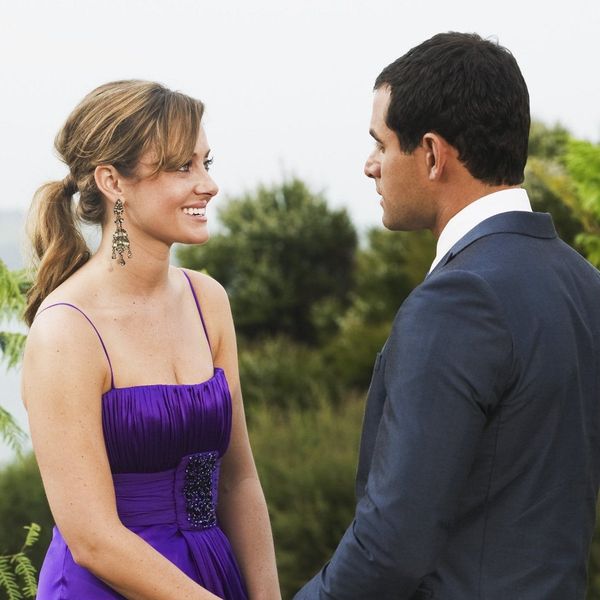 Arie Luyendyk Jr., The Bachelor, Season 22: Chris Harrison wasn't lying when he promised this would be "truly the most dramatic ending in Bachelor history." After saying goodbye to Lauren Burnham and proposing to Becca Kufrin — by promising to "choose [her] every day from here on out" — Arie changed his mind and decided to call off the engagement, on camera, during one of their "happy couple" weekends. Becca was blindsided, hurt, and angry — and so were viewers.

Rachel Lindsay, The Bachelorette, Season 13: Rachel Lindsay found her happily-ever-after with Bryan Abasolo, but the two hours or so before his proposal featured some of the most emotional and heartbreaking scenes in Bachelor Nation history. Rachel literally cried her eyelashes off during an intense, prolonged goodbye with Peter Kraus, who — despite being in love with her — wasn't ready to get down on one knee. Their reunion on the live After the Final Rose special was awkward, frustrating, and fraught with unresolved feelings. (Photo via ABC/Paul Hebert)

Ben Higgins, The Bachelor, Season 20: Ben Higgins broke all the (mostly unspoken) rules when he said "I love you" to both JoJo Fletcher and Lauren Bushnell. JoJo was expecting a proposal, but instead he told her that although he had found love with her, he had "found it with someone else more." Ouch. (Photo via Matt Dunn/ABC via Getty Images)

Kaitlyn Bristowe, The Bachelorette, Season 11: For the second time in as many seasons, Nick Viall found himself in the unfortunate position of being the runner-up. Although he was a late addition to Kaitlyn Bristowe's season, he was an early favorite, too — which made his goodbye that much more difficult. He went on and on about how much he loved Kaitlyn, and was about to get down on one knee to propose when she stopped him to say that she was picking Shawn Booth. (Photo via Rick Rowell/ABC via Getty Images)

Juan Pablo Galavis, The Bachelor, Season 18: Juan Pablo Galavis was a fan favorite on Desiree Hartsock's season of The Bachelorette, but the tide quickly turned against him once he became the Bachelor. And it wasn't just viewers who disliked him. Runner-up Clare Crawley told him off on the finale, saying he wasn't the man she thought he was and she didn't want her kids to have a father like him. You could actually hear the studio audience cheering her on, and then booing when Juan Pablo said he was glad he didn't pick her. (Photo via Rick Rowell/ABC via Getty Images)

Desiree Hartsock, The Bachelorette, Season 9: Desiree Hartsock made no secret of her love for Brooks Forester, so when he chose to leave in part one of the two-part finale, she was understandably devastated. She even questioned whether she wanted to finish the show. Ultimately, though, after a lot of tears, she realized that her feelings for Brooks had blinded her to the possibility of a future with someone else — namely, Chris Siegfried, whom she has since married. (Photo via Francisco Roman/ABC via Getty Images)

Ben Flajnik, The Bachelor, Season 16: Ben Flajnik's proposal to Courtney Robertson was a controversial one, since she was the so-called "villain" of his season. Her conflict with the other women took a toll on their relationship when the show aired, and Ben admitted on his After the Final Rose special that they actually broke up and stopped speaking for a time because of it. He ended up giving her the ring again the night the finale aired, but they broke up for good a few months later. (Photo via Nick Ray/ABC via Getty Images)

Ashley Hebert, The Bachelorette, Season 7: Ashley Hebert's finale started with some family drama, when she and her sister fought over whether J.P. Rosenbaum was the right guy for her. Ashley ultimately decided he was and said goodbye to Ben Flajnik — but not before letting him get down on one knee to propose. Oof. (Photo via Matt Klitscher/ABC via Getty Images)

Jason Mesnick, The Bachelor, Season 13: Jason Mesnick's finale is arguably the most infamous in Bachelor Nation history. After saying goodbye to runner-up Molly Malaney, he broke down sobbing on a balcony as she rode away in a limo. The image of him leaning over the railing and crying is so iconic that it has since become known as "pulling a Mesnick." But the most dramatic moment was still to come: During the live After the Final Rose special, he broke up with his winner, Melissa Rycroft, and asked Molly to give him another chance. (Photo via Matt Klitscher/ABC via Getty Images)

Brad Womack, The Bachelor, Season 11: Brad Womack earned a reputation as the most hated Bachelor in franchise history when he rejected both of his finalists, Jenni Croft and DeAnna Pappas, on the season 11 finale. DeAnna was especially blindsided, as he had told her the night before that the next day would be "a good day" for her. The backlash to his decision, or lack thereof, was immediate and overwhelming — he said later that he went into hiding for several weeks afterward. (Photo via Craig Sjodin/ABC via Getty Images)