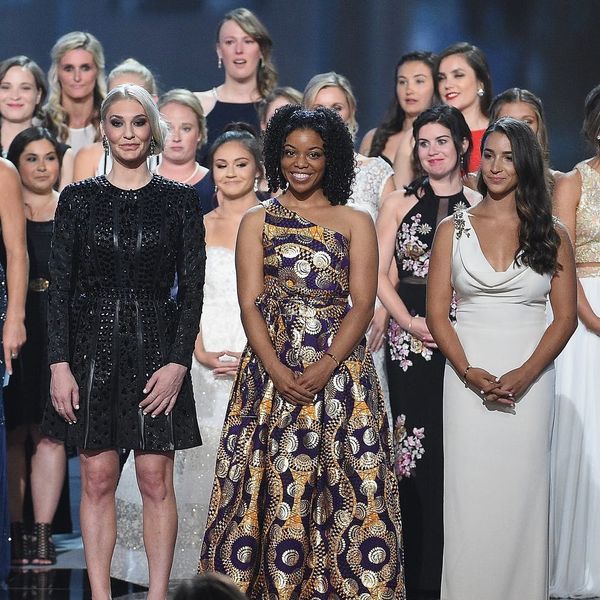 During last night’s ESPY Awards, more than 140 survivors of sexual abuse by former USA Gymnastics doctor Larry Nassar gathered onstage to be honored by the sporting body, receiving the Arthur Ashe Award for Courage. In what turned out to be the most powerful moment of the night — and one of the most powerful moments in ESPYs history — a number of Nassar’s victims, including Olympian Aly Raisman, spoke out against the abuse, sharing the moment with their “sister survivors” while speaking out on behalf of victims everywhere.

It took more than 90 seconds for the women to fill the stage. Nassar’s first known victim, Sarah Klein, opened the remarks, telling the audience, “It is a privilege to stand up here with my sister survivors as we represent hundreds more who are not with us tonight. Make no mistake, we are here on this stage to present an image for the world to see: a portrait of survival, a new vision of courage.”

Raisman also took the mic, accusing USA Gymnastics of years of inattention to victims who tried to come forward against the doctor. “All those years, we were told, ‘You are wrong. You misunderstood. He’s a doctor. It’s okay. Don’t worry. We’ve got it covered. Be careful. There are risks involved,'” Raisman said. “The intention — to silence us. In favor of money, medals, and reputation. But we persisted and finally someone listened and believed us.”

She went on to thank Judge Aquilina, who sentenced Nassar in January. She concluded her speech with a message to other survivors of abuse, saying, “To all the survivors out there, don’t let anyone rewrite your story. Your truth does matter. You matter and you are not alone.”

Raisman and Klein were joined in their remarks by Olympic softball player Tiffany Lopez, who was abused by Nassar as a student at Michigan State University. “I encourage those suffering to hold tight to your faith and stand tall when speaking your truth,” she said. “Because I’m here to tell you that you cannot silence the strong forever.”

The ESPYs audience gave the women an extended standing ovation, and remained standing during their remarks, which closed the show.

The Arthur Ashe Award for Courage has been presented since 1993 to people who display the courage, bravery, and willingness to stand up for what is right. Ashe was the first Black man to play tennis at an elite level in the US on a national team, and the only Black man to ever win all three major singles tennis awards. After contracting HIV from a blood transfusion, he became a tireless supporter of HIV/AIDS research and support.

Kat Armstrong
Kat has been a writer, social media maven and mom for longer than she's willing to admit. She's also spent time in front of and behind the camera, interviewing celebs, politicians and acting as a producer for fashion and artistic photography shoots. When she isn't writing for various orgs and publications, she's hanging with her kids, husband and French Bulldog, Peter, in Toronto, Canada.
Awards Shows
Current Events
Awards Shows