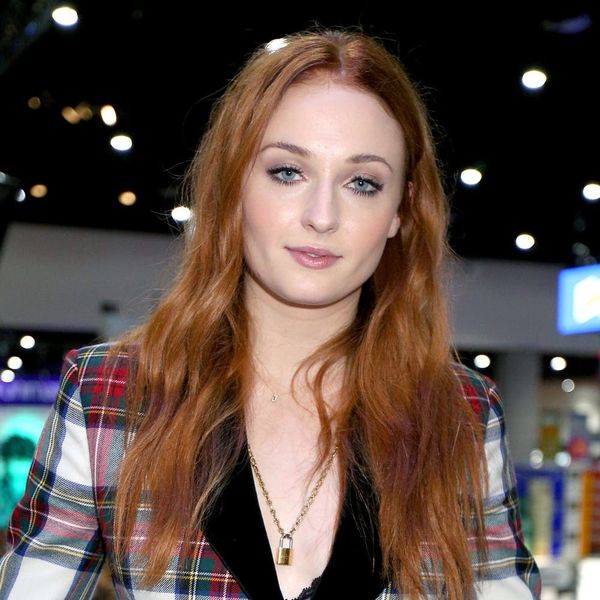 While there’s been plenty of exciting news emerging from this weekend’s Comic-Con convention on the film and TV fronts, like the shocking alliance we’ll begin to see emerge on tonight’s episode of Game of Thrones and the details surrounding the now confirmed Wonder Woman sequel, it was GoT star Sophie Turner that gave us our biggest fashion moment thus far.

The RL Sansa Stark showed up for the show’s Friday panel looking like a true girlboss in head-to-toe plaid, courtesy of the patterned cropped pantsuit she showed up in.

As Allure first pointed out, the look could easily be an ode to Clueless besties Dionne Davenport and Cher Horowitz, who wore similarly chic plaid getups in the beginning shots of the film — particularly Davenport, with that black, red, and white color scheme. Though Turner has traded their flared skirt for pants and the mini vest for a peekaboo lace bralette, the vibe remains largely the same.

Opting for comfort, the 21-year-old paired her grown-up look with plain white sneakers, forgoing the socks, because, why not!?

She also had what she called her best arm candy on hand — BF Joe Jonas. “He’s a good accessory,” she joked to ET.

Overall, the combo made for an A+ look that the Clueless girls would surely applaud — as did we!

Are you diggin’ Sophie’s ‘90s style? Tell us over @BritandCo.

Nicole Briese
Nicole is the weekend editor for Brit + Co who loves bringing you all the latest buzz. When she's not busy typing away into the wee hours, you can usually find her canoodling with her fur babies, rooting around in a bookstore, or rocking out at a concert of some sort (Guns N' Roses forever!). Check out all her latest musings and past work at nicolebjean.com.
Celebrity Style
Celeb Style
Celebrity Style Game of Thrones
More From Celeb Style