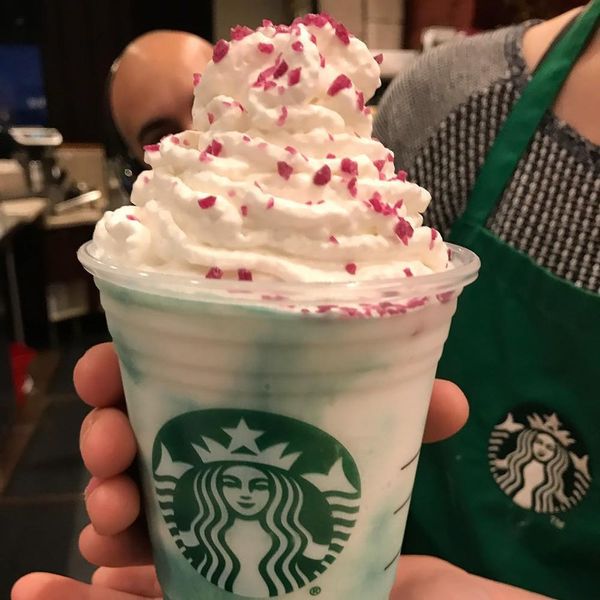 It’s no secret that Starbucks has upped its Insta-worthy beverage game over the past few months. From millennial pink Frappuccinos to the snackable Caramel Pretzel Frappuccino, the green siren has churned up pretty much every crazy concoction we can imagine. Nevertheless, Starbucks is at it again, and *nobody* could’ve predicted what’s coming next: The Crystal Ball Frappuccino.

I'm seeing in your near future a Crystal Ball Frappccino starting March 22! Come and find out what your color topping is!🔮 #crystalballfrappuccino

According to Business Insider, the new blended beverage riffs on the color-changing Unicorn Frappuccino — it has a hazy, multi-colored vibe that appears to morph and change (just like a crystal ball itself). The drink is an aqua color, but the hue provides no indication of flavor. According to BI, the Frappuccino is *peach* flavored(!)

COMING SOON TO A STARBUCKS NEAR YOU: the limited time #crystalballfrappuccino!!!! Are you feeling Adventurous (blue), lucky (green) or magical (purple)?!?! We will tell youuuuuuuu! March 22-25 #baristalife

The bev is topped with a hefty portion of whipped cream and multi-colored sugar crystals. One zealous barista on Instagram shared that each crystal color indicates a different feeling. “Are you feeling [a]dventurous (blue), lucky (green) or magical (purple)?!?! We will tell youuuuuuuu!” She wrote alongside an up close and personal shot of the colorful sprinkles.

The coffee chain has yet to confirm the rumors, but baristas and coffee sleuths are already taking to the ‘gram to share the magical concoction. “A gem of a drink, a diamond in the rough… your future is clear, you’re having a ball, with the Crystal Ball Frappuccino, coming soon to your favorite neighborhood Starbucks,” teased a Milwaukee-based Starbucks account. The account also alluded to the drink’s light, refreshing flavor: “It’s the perfect Frappuccino for in-between seasons! Like magic, it makes you feel so much closer to summer ✨.” (Yep, the peach rumors are probably true.)

A Starbucks store in Alabama posted a photo of the bev captioned, “Coming this Thursday… 🔮” According to BI, the mystical treats *are* slated to launch this Thursday, March 22, but they’ll disappear a mere four days later on the following Monday, March 26 — or while supplies last. We’ve reached out to Starbucks for more details.

In case you're wondering what I do all day when I'm not being a drag queen. Starts March 22 💕🔮 #starbucks #crystalballfrappuccino #shelbyhurst #tobeapartner

While we don’t have a crystal ball, we *can* predict these will sell out in a flash!

Are you planning on snagging one of the limited-edition crystal ball Frappuccinos? Let us know @BritandCo!