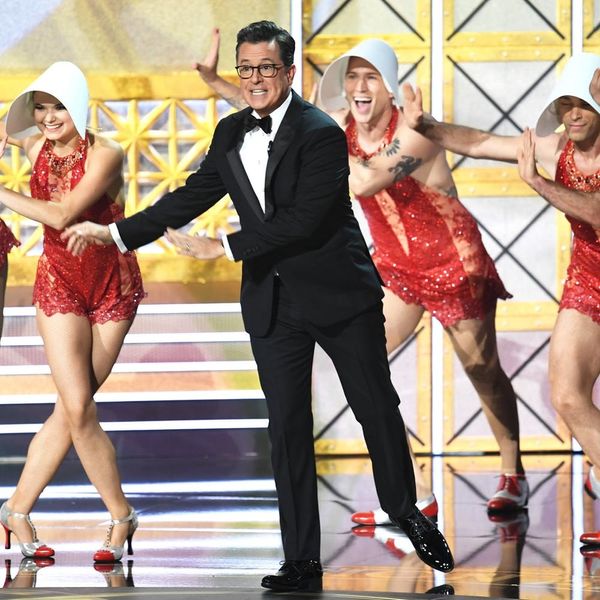 In a year fraught with high drama from both celeb news and politics, leave it to Stephen Colbert to set the tone for the 2017 Emmys. Even before the first winner was announced, it was clear that Colbert’s Emmy Awards would be about calling things like he sees them and celebrating all that television has to offer, starting with his opening song, “The World’s a Little Better on TV.”

Colbert began the musical cold open forging awards in his dressing room, where he was joined by Anthony Anderson and Allison Janney. Joking about the state of the world, he crooned, “Troubles aren’t so troubling when you see them in HD. The world’s a little better when you see it on TV.” As he sang, he danced through a number of sets for different TV shows, including Archer, This Is Us (where he threw around Kleenexes with the Big Three), Stranger Things (“much less stranger than our reality”), and Veep.

He then gave the spotlight to Chance The Rapper, who rapped about social issues while pointing out his favorite shows.

What do we have to do to get @chancetherapper to host the #Emmys next year? pic.twitter.com/Vu4tuZJnRG

Later, taking center stage again, Colbert shared his HBOGo password and led a troupe of dancing Handmaids before launching into his monologue — where no one was safe.

After pointing out that every nominee should thank Game of Thrones because it wasn’t eligible for any awards this year, Colbert poked fun at some of the nominees, CBS CEO Les Moonves, Bill Maher (“I assume Bill Maher is black ’cause he seems so comfortable using the n-word”), and President Trump.

.@StephenAtHome gives Trump a shout-out in his #Emmys opening monologue: "Looking forward to your tweets" pic.twitter.com/KOqkkf3aJw

Before wrapping up his monologue, Colbert had one more surprise in store: a cameo by former White House Press Secretary Sean Spicer, who rolled out with his own mobile podium (a la Melissa McCarthy on SNL). The audience was in absolute shock. (If there were an Emmy for best audience reaction, it would go to Veep‘s Anna Chlumsky.)

Sean spicer showing up to the Emmys like.. #Emmys #Emmys2017 pic.twitter.com/LAMNt5SWq1

What did you think of Colbert’s Emmys opening? Let us know @BritandCo.

Kat Armstrong
Kat has been a writer, social media maven and mom for longer than she's willing to admit. She's also spent time in front of and behind the camera, interviewing celebs, politicians and acting as a producer for fashion and artistic photography shoots. When she isn't writing for various orgs and publications, she's hanging with her kids, husband and French Bulldog, Peter, in Toronto, Canada.
Emmys
TV
Emmys
More From TV