Study Finds Eating Cheese Every Day May Be Good for You, and BRB, We’re Getting Some Cheddar 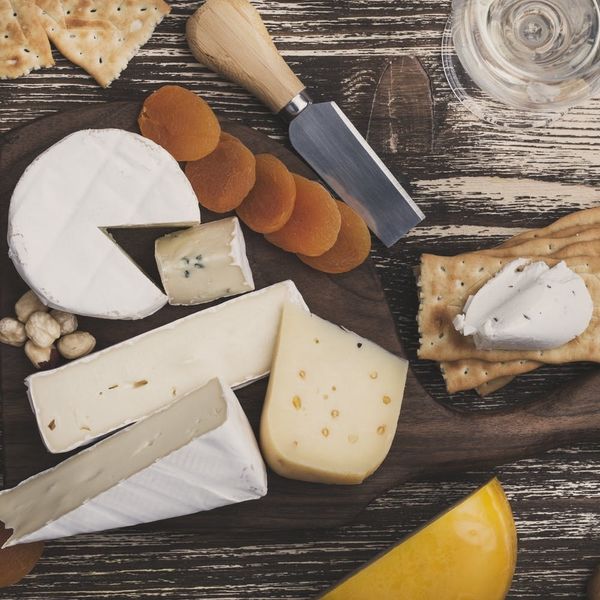 Sometimes it seems that nutrition research is constantly changing. One day a certain food or drink is fighting cancer, the next it’s causing it; first, a nutrient is praised, then with a turning tide, it’s vilified. But if there’s one new line of research we’re totally ready to get on board with, it’s a new analysis by Chinese and Dutch researchers on 15 observational studies including over 200,000 people. Their subject? The relationship between eating cheese on cardiovascular health.

Taken as a whole, the research revealed that people who ate a moderate amount of cheese daily had a 14 percent less risk of developing coronary heart disease and a 10 percent reduced risk of having a stroke. In short, eating a little bit of cheese every day may actually be good for you.

That’s right. We said “cheese” and “good for you” in the same sentence. Feel free to do a happy dance. Or run out and grab some cheddar. Or both.

Obviously, these conclusions are not what you might expect. Generally, nutrition professionals advise us to away from the food that makes pizza, lasagna, and fondue so delectable. Its high saturated fat has traditionally been associated with atherosclerosis — the narrowing of blood vessels — and its often-high sodium content would typically be assumed to increase blood pressure.

So what could possibly explain a connection between moderate cheese consumption and better cardiovascular health?

There are a few answers. First, in considering this research, experts did make note that the data was self-reported, meaning it was not collected under perfect lab conditions and could, therefore, be influenced by subjects’ own perceptions of their cheese consumption. Also, the type of cheese eaten was not taken into account. Perhaps feta, for example, with its lower saturated fat content, has a more protective effect on the heart than, say, triple cream Brie.

Still, there are some concrete reasons why including a bit of cheese every day could provide measurable advantages for heart health. Like its dairy cousin yogurt, cheese — especially aged cheese — often contains a significant amount of probiotics, the healthy bacteria that helps our digestive system thrive (among numerous other benefits). When gut flora is happy, it reduces inflammation throughout the entire body, including the cardiovascular system. Additionally, the calcium and protein in cheese may play a role in this positive correlation. Calcium is required for cardiac muscle contraction, and protein functions as a building block of muscle. Since the heart is a muscle, this could explain some protective action.

But now the real question: What does “a little bit of cheese” every day actually mean? The analysis of the 15 studies indicated that the sweet spot for supporting heart health fell somewhere around 40 grams per day. For reference (since most of us aren’t carrying around our food scale) 40 grams of grated hard cheese looks like 3/8 of a cup, or six tablespoons a day. This amounts to 1.3 ounces, just under the 1.5-ounce measurement that is considered one serving.

Unfortunately, when it comes to such a delicious subject, more isn’t necessarily better. The research showed a nonlinear relationship between cheese consumption and risk of heart attack and stroke. As in, eating a lot more than one serving per day does not necessarily equate to additional heart benefits. In addition, the study only shows that eating cheese is associated with cardiovascular health, not that it directly causes it. So while we may have been raised with a message of three servings of dairy per day, experts like Dr. Walter Willett, professor of nutrition at Harvard’s T.H. Chan School of Public Health, advise consuming only one to two daily servings of dairy — whether cheese, milk, or yogurt.

The take home message: Use your daily cheese allotment wisely, but do use it! Your cardiovascular system and your taste buds will thank you.

Are you already out the door to buy some feta? Tell us @BritandCo.

Sarah Garone
Sarah Garone is a mom, wife, nutritionist, and freelance writer in Mesa, AZ. She loves music and travel, speaks fluent German, and does a lot of running (to counterbalance the surprising amount of cookies she eats for being a nutritionist). Find her sharing great recipes and helpful nutrition info at A Love Letter to Food.
Health
More From Health