This Teen-Created Tampon Video Game Is All Kinds of Awesome 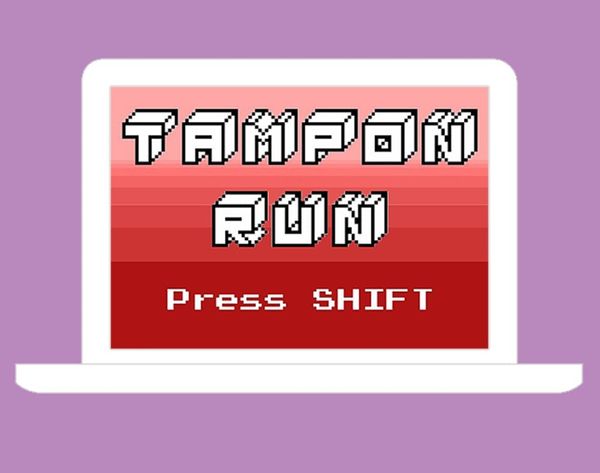 What happens when girls code? Girls (and women) make amazing things. Things you want to download, share, play and tweet about, like the latest video game to totally take over our lunchtime funtime: Tampon Run.

Don’t LOL just yet, this game is made to make you think differently about more than just a high score. It follows a 16-bit-sized super heroine walking down the street, defeating dudes with a unique arsenal. The weapons in Tampon Run are, you might have guessed it, tampons. Strange? Um, not really. As the creators, NYC high school students and Girls Who Code grads Andrea “Andy” Gonzales and Sophie Houser, point out, “It’s stranger that our society has accepted and normalized guns and violence through video games, yet we still find tampons and menstruation unspeakable.” Preach, sisters.

The aim of the game is simple. You defeat your enemies by shooting cotton torpedos at them. To gain more ammunition, collect tampon boxes along your journey. Once you run out of tampons, it’s GAME OVER. The game is addictive, but it’s just a gateway for getting to know more about its true superheroes, the two young women who conceptualized, coded and created it.

Sophie and Andy are budding Internet stars by way of Girls Who Code, the nonprofit working to close the gender gap in the technology and engineering worlds. Sophie tells us that it was her mom who suggested she apply to GWC this past summer. “She thought I would like coding because it’s creative and mathy, both things I love.” Even if, Sophie soon discovered, coding is actually “more logical than mathy.” Andy spent previous summer vacays canoodling with coding at the co-ed SummerTech Computer Camps, and Summer ‘14 at Girls Who Code (once she was old enough to apply, of course).

For their GWC final project, the two new friends teamed up to work on a video game that they hope will be a gamechanger on a more global scale than your immediate social media circle. “Andy wanted to build a video game that made some sort of social impact. I liked the idea of using code to create social change (and I liked Andy!), so I joined,” Sophie explains. “While brainstorming, I jokingly said we could create a game in which a girl throws tampons. As soon as I said it, we knew there was something there.”

“My initial intention for the game was to address the hypersexualization of women in video games,” says Andy. “But when Sophie threw (haha) the tampon idea onto the table, I was swept away by it. We didn’t realize this issue really existed, and on such extreme levels (in some countries, women end up isolating themselves while they’re menstruating, are just uneducated on how to care for themselves, and/or can’t afford it). It’s a totally legitimate issue, and I’m so happy that we were able to help bring it to light.” We are too — a powerful concept, mission (and hopeful impact) behind a seemingly simple game.

Tampon Run as you know it now is just Version 1.0. Sophie and Andy tell us that they are working on making the game more difficult, creating a global leader board so people around the world can compare scores and answering the many requests they’ve gotten in this short launch period for a mobile version. You go, girls. ‘Til then, we’ll be using this pair as inspiration for our own foray into coding. Girls who code = girls who rule = women who will change the world — wouldn’t you agree?

Have you played Tampon Run yet? What do you think of Andy and Sophie’s mission? Seriously, how inspired are you by these two?! Give ’em some love below!

Lisa Raphael
In her past professional lives, Lisa has served the masses as the Editorial Director at Brit + Co, Bieber Whisperer at J-14, Golden Girls Fan Club Prez at Lifetime and Talk Show Host Understudy to Katie Couric. Now, she's taking on the sports world at The Relish, teaching Hairography 101 in her spare time and will forever be trying to fill the hole Zayn Malik left in her heart.
Coding
Tech
Coding STEM Womens Health