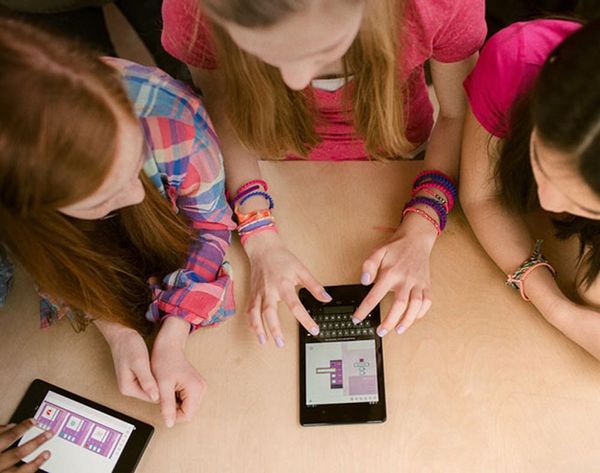 The rumors are true, code is easy to learn. And you can learn it and create games and apps — but that’s not what teenager Brittany Wenger is using it for. She’s using it to help find a cure for cancer, and she’s just one of many young women and girls making with code, hacking away at the glass ceiling that looms over the tech industry. Pretty soon that niche group is about to become an army thanks to the new, easiest, awesomest way to get girls coding: Made With Code.

Backed by Google, this sweet ‘n’ simple site takes making to a different, digital level to prove that code can be the most creative tool in your toolbox… because you can create, well, everything with it. Log on and tackle different missions and projects that are basically games. In each, the “reward” is something you can instantly see and share.

Use the accessorizer to style a Like-able selfie, design a new avatar for your social networks, create a GIF that’ll have all of your friends LOLing, produce your own personal soundtrack and even make a bracelet. That you can actually wear.

Google teamed up with Shapeways for this particular project, where girls can use Blockly programming lingo to design and code a bracelet that will be 3D printed and delivered right to their wrist. We told you this was cooler than just being able to make a Flappy Bird clone.

On top of these fun to dos, Made With Code introduces its budding binary BFFs to a community of mentors meant to inspire them to keep making long after they’ve received those bracelets. There’s Ebony “WondaGurl” Oshunrinde who mixes beats for Jay Z, Pixar animator Danielle Feinberg and Miral Kotb, a computer scientist dancer combining dancing and coding on Broadway. Sooo, basically super swoonworthy geniuses who we want to be when we grow up. Besides strengthening their STEM skills, Made With Coders can virtually hang with other girls “just like them” or ones they might want to be in a couple years — like Brittany who’s coding to find a cure for cancer or Maddy, a 20-year-old fashion designer creating kinetic, illuminating, self-folding clothing.

Although other “learn to code” programs exist, Made With Code kicks their butt in a couple important ways. First, it shows girls how to “hack” the spaces they’re already living, Tweeting, sharing and selfie-ing in. Not everyone is a gamer, but most of us know our way around a social network and are used to posting and playing with photos online or on our phones. The 3D printed bracelet project has an important educational edge, too. It’s one thing to hear about 3D printing this and that, but to use it to make something tangible, fashionable, rock-able means it could be a gateway for way more making.

All accessories aside, the standout feature to us is that MWC is providing a completely free web service. iPads and smartphones aren’t in the homes or hands of every family and child in our country, but access to a free program that you can use on any computer (even at school or at a local library) makes coding as accessible as possible. And coding, as Made With Code is hinting at, is the framework of some great things: computers, apps, bracelets, cures, songs, your dreams.

Do you know how to code? Is there a young person in your life who you’ve gotten into coding? Share their story below :)

Lisa Raphael
In her past professional lives, Lisa has served the masses as the Editorial Director at Brit + Co, Bieber Whisperer at J-14, Golden Girls Fan Club Prez at Lifetime and Talk Show Host Understudy to Katie Couric. Now, she's taking on the sports world at The Relish, teaching Hairography 101 in her spare time and will forever be trying to fill the hole Zayn Malik left in her heart.
Coding
Tech
Coding Google STEM
More From Tech