Underpaid, Overworked, and Uncertain of the Future, America’s Public School Teachers Are Fighting Back 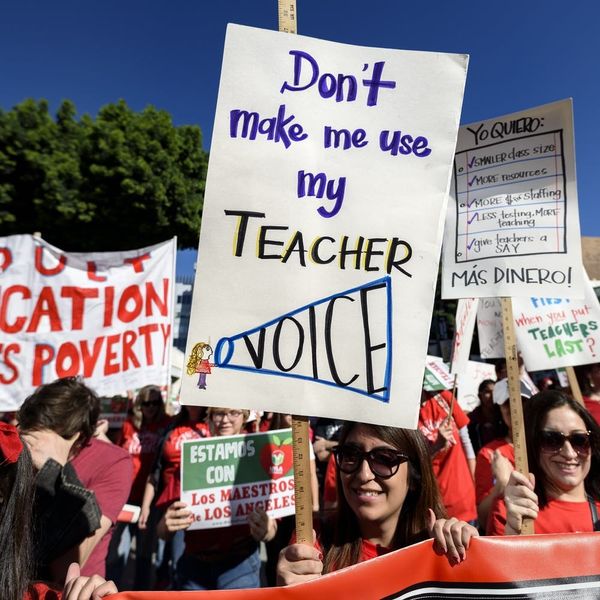 Myriad challenges face educators, especially those working in public schools: low and stagnant pay, benefits that don’t cut it, and contending with a challenging political climate. Now, after years of a national teacher shortage, it looks like those challenges are coming to a head. The wave of high-profile teacher strikes that rocked the country in 2018 is showing no signs of receding, with a strike by thousands of teachers in the Los Angeles Unified School District already slated for next Monday. And according to new data from the US Department of Labor, more US educators left their jobs in the first 10 months of 2018 than ever before.

Each month, an average of 83 of 10,000 teachers and other public school employees (including staff like school psychologists, janitors, and community college instructors) quit during the first 10 months of 2018 — a 10 percent increase from 2017. It’s also a sizable jump from 2009, when the average monthly rate at which education workers left their jobs was 48 per every 10,000.

The Wall Street Journal notes that while a competitive labor market has bumped job mobility across industries, the fact that it’s happening in education to its current extent is notable; people tend to be attracted to jobs in schools because of the relative stability these roles offer and are thus less likely to move around. But teachers were laid off in droves during the Great Recession, and while there’s been an uptick in teacher hirings in recent years, it hasn’t been enough to make up for all the teachers who lost their jobs, according to two 2016 reports from the nonprofit and nonpartisan Learning Policy Institute.

Teaching has long been a resource-strained and underpaid profession, so additional financial constraints on school districts over the last decade have hit hard and are giving teachers more cause for apprehension. Joe Gondolfi, a high school English teacher for Chicago Public Schools (CPS), tells Brit + Co that his number-one worry for the teaching profession right now is the erosion of labor rights.

“Really since the beginning of education in the US, the profession of teaching has been somewhat embattled in a variety of ways, and because of that, it’s important that we have that collective power,” Gondolfi says. “My biggest concern is the risk of teachers’ unions going the way of other big unions, which is to say they’ll be basically non-existent and lose all their power.”

These fears are well-founded. Teachers unions have been subjected to aggressive union-busting around the country in recent years. An infamous recent example of this was when the state of Wisconsin passed legislation that decimated the collective bargaining rights of unions in 2011. In the years after this legislation, Act 10, passed, teachers’ salaries have fallen and benefits declined sharply. The rate of teachers who left the profession between 2010 and 2011 rose drastically (from 6.4 percent to 10.5 percent) compared to the previous academic year, according to CNN.

Teachers in Wisconsin are now also slightly less experienced than they were before Act 10. In the 2010-2011 school year, the average Wisconsin teacher had 14.6 years of experience on the job, whereas during 2015-2016, teachers had an average of 13.9 years of experience. Gondolfi says that politicians like to talk a big game about how important it is to have qualified, excellent teachers in classrooms, “but when it comes down to footing the bill, they want a body in a room.” Concern over the shortage of qualified teachers was also raised by Learning Policy Institute president Linda Darling-Hammond in a 2016 interview with NPR.

The Trump administration has compounded the vulnerability of teachers’ unions by implementing, or attempting to implement, a large swath of measures that inhibit workers’ rights. Notably, Trump signed a bill in September that cuts funding for the National Labor Relations Board, the government body that has traditionally enforced unions’ legal rights.

Inside classrooms, the volatile political climate under Trump has posed additional challenges. Evelyn Rebollar, an English teacher at the Bronx Arena High School in New York, tells us that the day after Trump was elected to office, she wrote a letter to her students in order to reassure them that they would remain safe and respected in her classroom, regardless of factors like their sexual orientation, immigration status, race, or religion.

“[A]s en educator I feel like I constantly have to remind them through both classroom structures and built relationships that they have no need to worry about that within the school’s walls,” Rebollar says.

At a school where 97 percent of the student body belongs to a racial minority group, and nearly three-quarters come from economically disadvantaged households, the president’s racist jargon and policy measures have put many of Rebollar’s students on edge. Rebollar, who has been a teacher for eight years, has altered her curriculum as a response.

“In past years, I tended to shy away from explicitly political texts, focusing on fiction or informational scientific pieces in my classroom,” she says. But this school year, Rebollar is implementing a political reading list and “an emphasis on research and analysis so [students] know which information to trust and how it applies to the country and themselves.”

While teachers like Rebollar make changes in the classroom to meet new demands imposed by political discourse, other teachers across the country have taken action to pursue better treatment.

In February 2018, some 20,000 teachers and public school employees in West Virginia went on a wildcat strike (a strike that is not officially condoned by a union’s leadership) as they demanded higher wages and improved health care benefits. West Virginia was the first state to see teacher strikes last year, and other teachers’ unions soon took actions of their own. Strikes spread around the country, leading to teacher walkouts and demonstrations in Oklahoma, Arizona, Colorado, and North Carolina.

Additional school districts, besides Los Angeles, are prepared to go on strike in 2019. According to Education Week, Oakland school teachers may also go on strike this year; some teachers in the district already participated in a wildcat strike at the end of 2018.

Amid strikes and political threats, teachers are still contending with the day-to-day challenges that come with the profession. Gondolfi tells us that, while it’s thought of as a bit of a cliche, teachers really do play many roles in the classroom that exceed teaching content to students. He says that he also regularly plays the role of a counselor to students who are struggling with issues that aren’t necessarily related to school. This is the work teachers sign up for, which is made harder by the reduction of rights and compensation.

Despite some teachers’ decision to leave the profession this past year, many who remain are continuing to fight to maintain their union rights, demand better pay, and defend their students’ safety and opportunity to learn. After the streak of successful teachers strikes in 2018, and with more policy challenges surely in store, teachers are poised to once again make bold stands for themselves and the entire profession.

Elizabeth King
Elizabeth King is a politics, history, and culture writer based in the Twin Cities. She is generally pretty cranky but still enjoys traveling, music from the early 2000's, and plotting the resistance. Feel free to say hi on Twitter at @ekingc or check out some of her work at www.elizabethcking.com.
Activism
Current Events
Activism Politics