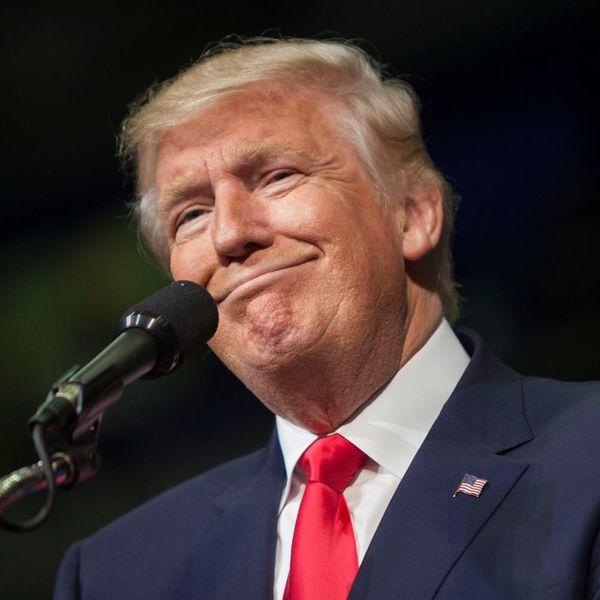 This is… not cool. Republican presidential candidate Donald Trump still has the public reeling after the last debate, just threw a massive Twitter tantrumandspent a week attacking a ‘90s beauty queen. But things aren’t about to cool off now. That’s because news is buzzing over the revelation that during the 1997 Miss Teen USA pageant, Donald Trump walked into the girls’ changing room. Though some of the ladies were as young as 15, Donald apparently saw no issue with the sitch, simply replying, “Don’t worry, ladies, I’ve seen it all before.” OMG no. And ew!

The news comes from the pageant contestants themselves, with Mariah Billado, former Miss Vermont Teen USA, telling BuzzFeed, “When he started running for president, that is one of the first things I thought about: Oh, gross, this guy walked in on us in the pageant.” She added, “Girls were just scrambling to grab stuff, whatever garments they had. I remember putting on my dress really quick because I was like, ‘Oh my god, there’s a man in here.’”

Three other ladies (who wanted to remain anonymous) confirmed the incident, saying it was “shocking” and “creepy.”

Though one contestant refuted the story, saying there was too much security around for it to have happened, a former Miss Arizona told CBS that Trump did the same thing during a 2001 pageant, revealing, “Our first introduction to him was when we were at the dress rehearsal and half naked changing into our bikinis. He just came strolling right in. There was no second to put a robe on or any sort of clothing or anything. Some girls were topless. Others girls were naked.”

Not only that, but Trump actually ADMITTED and bragged on The Howard Stern Show in 2005 about his ability to go backstage while contestants are changing, saying, “I’ll go backstage before a show, and everyone’s getting dressed and ready. I’m allowed to go in because I’m the owner of the pageant, and therefore I’m inspecting it. You know they’re standing there with no clothes. And you see these incredible looking women. And so I sort of get away with things like that.” Looks like he’s not getting away with it anymore.

Peeps on Twitter have reacted… well, you can guess how they’ve reacted…

Wait wait wait. Trump walked backstage when Miss Teen USA contestants were naked and/or changing. Some were as young as 15. #lockhimup

Trump is a predator. Miss Teen USA has known that for YEARS! It was suppressed. Sick huh??

just what men do, ok, we use Dad's money to buy Miss Teen USA pageants so we can violate underage girls. Can't wait to get control of NSA!

@marcorubio Trump walked in on teen beauty contestants as they were changing. How can you endorse someone so disgusting? #unfittoserve

The 1997 Miss Teen USA pageant. Trump was in his fifties. They were fifteen. He abused his position to ogle them naked. https://t.co/8Mc9oxF1pE

What do you think about Donald Trump walking into the Miss Teen USA dressing room? Tweet us @BritandCo!