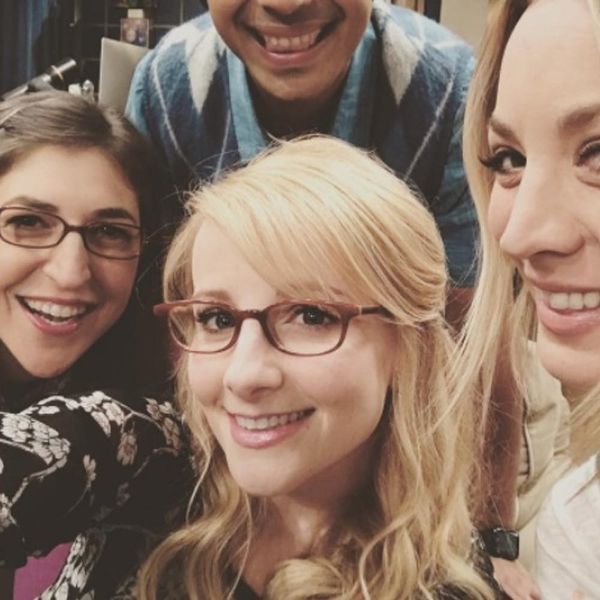 Melissa Rauch, AKA Dr. Bernadette Rostenkowski-Wolowitz, may be one of the stars of The Big Bang Theory, but behind the scenes she’s been dealing with personal struggles that many women can relate to. After announcing that she’s expecting her first child this fall, the 37-year-old actress also opened up about the heartbreaking miscarriage she suffered.

“Here is the only statement regarding my pregnancy that doesn’t make me feel like a complete fraud: ‘Melissa is expecting her first child. She is extremely overjoyed, but if she’s being honest, due to the fact that she had a miscarriage the last time she was pregnant, she’s pretty much terrified at the moment that it will happen again,'” Rauch told Glamour during a new interview with the magazine where she added, “’She feels weird even announcing this at all, and would rather wait until her child heads off to college to tell anyone, but she figures she should probably share this news before someone sees her waddling around with her mid-section protruding and announces it first.’”

While we’re thrilled for the beloved actress, known for her brilliantly quirky character, we’re also touched that she’s decided to open up about the experience that she admits, left her with “one of the most profound sorrows I have ever felt in my life… It kickstarted a primal depression that lingered in me. The image of our baby on the ultrasound monitor — without movement, without a heartbeat — after we had seen that same little heart healthy and flickering just two weeks prior completely blindsided us and haunts me to this day. I kept waiting for the sadness to lift…but it didn’t.”

She also admits that it became nearly impossible to feel joy when others around her found out that they were expecting, saying that pregnancy announcements “felt like a tiny stab in the heart. It’s not that I wasn’t happy for these people, but I would think, ‘Why are these shiny, carefree, fertile women so easily able to do what I cannot?’”

That’s why, now that she’s expecting again, she admits, “When I thought about having to share the news about expecting this baby, all I could think about was another woman mourning over her loss as I did, worried she would never get pregnant again, and reading about my little bundle on the way. It felt a bit disingenuous to not also share the struggle it took for me to get here.”

That’s why she’s decided to be honest about her miscarriage, a term she feels unfairly puts the blame on the woman. “[Miscarriage] deserves to be ranked as one of the worst, most blame-inducing medical terms ever. To me, it immediately conjures up an implication that it was the woman’s fault, like she somehow ‘mishandled the carrying of this baby.’ F that so hard, right in its patriarchal nut-sack.”

She also admitted to herself that “’It is OK to not be OK right now” and that her pain (as well as her husband’s) “is something to be worked through until it isn’t anymore.”

Tape night @bigbangtheory_cbs with beautiful ladies @normancook & @missmayim & the most handsome bottom half of a face belonging to @kunalkarmanayyar courtesy of my short selfie arm.

She reveals that the experience has changed her, saying, “I know it’s made me grateful for every moment of my current pregnancy, and I hope it will make me a better mother in some capacity when I can finally hold the child that has been in my heart in my arms. Although I can’t categorize these lessons of humble appreciation and gratitude as ‘reasons for this happening,’ I will consider them a silver lining. (But to be honest, I would’ve much preferred to learn said lessons from either a fortune cookie or by watching a few heartfelt reruns of Full House.)”

She ended by reaching out to others directly, saying, “So, to all the women out there who are dealing with fertility issues, have gone through a miscarriage or are going through the pain of it currently, allow me to leave you with this message: You are not alone. And, it is perfectly OK to not be OK right now.”

Were you moved by Melissa Rauch’s courage and honesty? Tell us @BritandCo.

Desiree O
Desirée O is a ‘Professional Bohemian’ who loves anything and everything related to the arts, entertainment, and pop culture. She ADORES being a ‘Newsy’ for Brit + Co, covering all of the latest tidbits of awesomeness that you want to read about. When she’s not writing, she’s either making messy art, going on long adventurous walks with her camera, or poking around over at bohemianizm (http://www.bohemianizm.com/). You can find out about Desirée O and her work at http://DesireeO.com/ or follow her on Twitter @DesireeO.
Pregnancy
Celebrity News
Pregnancy
More From Celebrity News