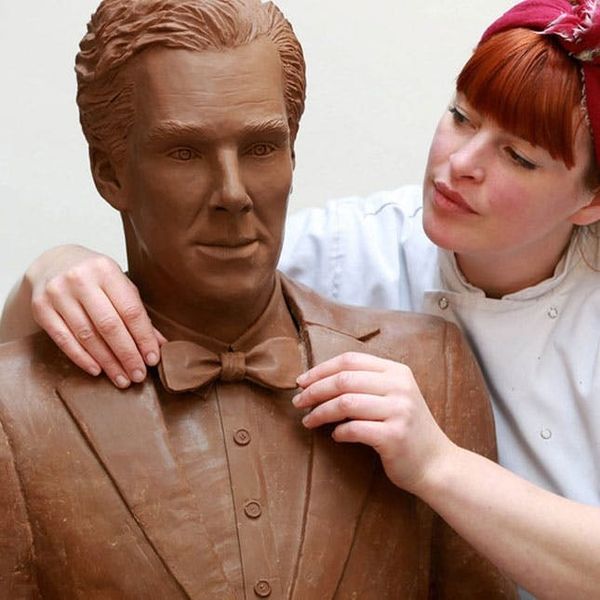 It’s a springy Friday here in San Francisco and this week has been a doozy, mostly because of our brand new brand, Bro + Co. Wait. Really? Did you just fall for that… again? It’s a joke, people, but message received — you want some content for dudes, and we just might oblige. Now, onto the BritList.

1. Disco Dog: This is the light-up coat you had no idea your dog needed. Control the light pattern from your phone, make it spell out words and sentences or just go for straight disco.

What. Yes. Created by UKTV just days before Easter, “the biggest chocolate event on the UK calendar” (since when are “chocolate events” a thing?), this 88-pound masterpiece is… sweet. (h/t Refinery 29)

4. The Gummy Bear Bed: Apparently we’ve got a thing for extra large candy today! You can view this bed, made entirely out of gummy bears, through Monday April 6 at IT’SUGAR at 655 Broadway in New York City.

These spit in the face of novelty ice cubes everywhere. Created by ad agency TBWA/Hakuhodo for Japan’s Suntory Whisky (yes, as in Suntory Time), these ice cubes were created using Autodesk 123D and a CNC router. So cool. Pun intended.

6. Frenchie Coin Bank ($48): Also known as the cutest piggy bank you ever did see.

7. Deep-Fried Cadbury Eggs: I mean. Just. No. But maybe yes?

8. Fuller House: And now, the moment you’ve all been waiting for: According to Variety, Netflix is inches away from reviving Full House, and guess what? It’s going to be called Fuller House. And as far as we can tell, this is NOT an April Fools’ Joke. #HaveMercy

9. Favorite Things Raglan Pullover ($44): This is the perfect top for a lazy Sunday… that turns into a fun-day.

Anjelika Temple
As Co-Founder and Chief Creative Officer of Brit + Co, Anjelika Temple brings her voracious consumption of all things creative and colorful to DIY projects, geeky gadgetry finds and more. When she's not DIY-ing her heart out, you'll find her throwing dinner parties with friends or adventuring with her husband David, their daughters Anokhi and Indira, and their silly dog Turkey.
3D printing
Home News
3D printing BritList
More From Home News