The Mermaid Frappuccino Is Starbucks’ Latest Gift to Your Instagram Feed 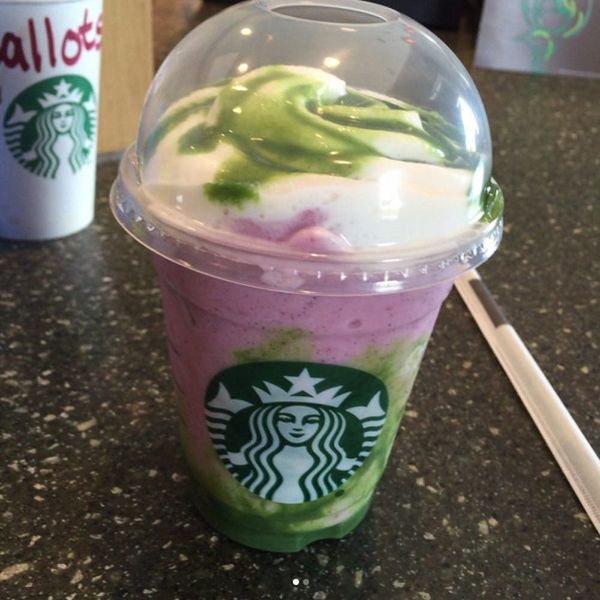 We totally predicted this! After Starbucks announced that it would be introducing more specialty frapps in the wake of the super successful Unicorn Frappuccino, we knew that the Pink Pegasus Frappuccino and Dragon Frappuccino wouldn’t be the only mythically inspired drinks coming our way. And now it looks like we were absolutely right to assume that the next flavor would be a surely delish Mermaid Frappuccino.

Reportedly created by Starbucks’ employee The Modern Barista, the Mermaid Frappuccino looks a lot like the Dragon Frapp with a pink and green mixture, but uses a Vanilla Bean Frappuccino as the base as opposed to a Green Tea Frappuccino.

To order, find a friendly barista who’s willing to pop three scoops of blackberry into a grande Vanilla Bean Frappuccino. Now here’s where it gets a little tricky: You’ll want to add a drizzle made up of eight pumps of white mocha, three pumps of toasted coconut, and three scoops of matcha powder. If they’re not willing to make the drizzle for you, Starbucks Melody suggests topping your whipped cream with matcha for an (almost) equally awesome drink.

We have to say, we would’ve added a little more sparkle, flash, and fabulousness to our mermaid-inspired treat (just take a peek at mermaid toast for a perfect example), but we’re sure this is just as tasty.

Will you be trying out the Mermaid Frappuccino? Let us know @BritandCo!

Desiree O
Desirée O is a ‘Professional Bohemian’ who loves anything and everything related to the arts, entertainment, and pop culture. She ADORES being a ‘Newsy’ for Brit + Co, covering all of the latest tidbits of awesomeness that you want to read about. When she’s not writing, she’s either making messy art, going on long adventurous walks with her camera, or poking around over at bohemianizm (http://www.bohemianizm.com/). You can find out about Desirée O and her work at http://DesireeO.com/ or follow her on Twitter @DesireeO.
Starbucks
Food News
Starbucks
The Conversation
Reviews:
More From Food News