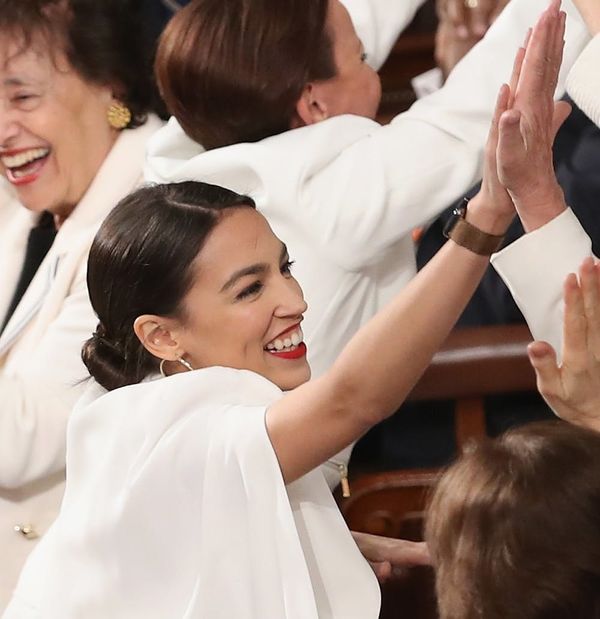 President Trump’s 2019 State of the Union address clocked in at 82 occasionally tense minutes — the longest such speech since President Clinton’s 2000 SOTU address — but it wasn’t without its moments of levity and redemption. It was the first SOTU ever with more than 100 sitting Congresswomen in the audience, and they made an unmissable visual statement in a sea of white outfits. It was a show of solidarity among the women, but also a warning to the male political establishment: This is what the future will look like, and we will work together to make it so.

The donning of all-white clothing by women in politics has become a familiar nod at the suffragette movement. Hillary Clinton accepted the 2016 Democratic nomination for president in a white pantsuit, and Alexandria Ocasio-Cortez donned a similar suit at her January inauguration. A group of women Democrats also wore matching white outfits for Trump’s joint address to Congress in 2017.

“Wearing suffragette white is a respectful message of solidarity with women across the country, and a declaration that we will not go back on our hard-earned rights,” Florida Rep. Lois Frankel told CNN ahead of Tuesday’s address.

The initiative to wear white to the SOTU was led by the House Democratic Women’s Working Group, but Democrat women weren’t the only ones who took part: First Daughter Tiffany Trump also attended the speech in an all-white ensemble, which has caused some speculation that she may be rooting for the new Democratic women in office. And Rep. Dean Phillips of Minnesota showed up in a white jacket with black lapels, on which he had pinned a button reading “ERA yes,” a reference to the Equal Rights Amendment, which has yet to be ratified after nearly half a century.