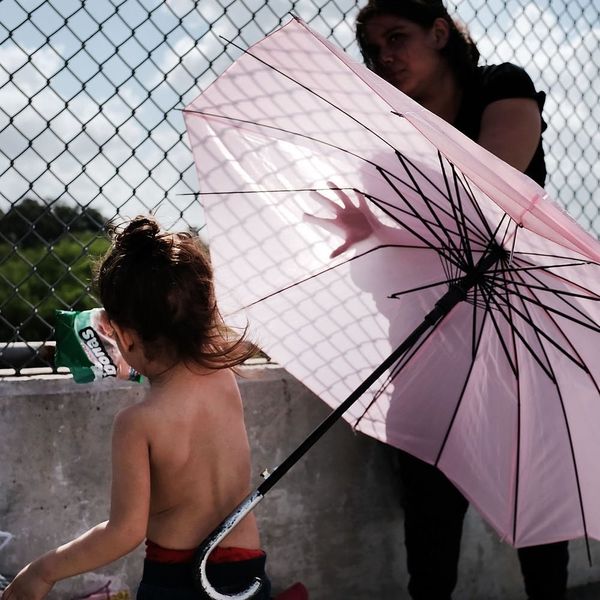 The Trump administration claimed months ago that it had ceased its policy of separating asylum-seeking and immigrant families at the US-Mexico border. As has become characteristic of this administration, they lied.

ProPublica reported on Tuesday that immigration lawyers with Catholic Charities have encountered at least 16 new cases of family separations at the border since the administration claimed to end this inhumane practice on June 20. ProPublica itself uncovered an additional case of a Salvadoran father who was separated from his four-year-old son by Customs and Border Patrol, also after the policy supposedly ended.

According to the report, ProPublica found the four-year-old, Brayan, after speaking with his father, Julio. Brayan was literally “yanked” from his father by Border Patrol agents after they crossed the border, and then placed in a temporary foster home, according to ProPublica.

USA Today reports that while a senior CBP official acknowledged that immigrant families are still being separated, these separations have “nothing to do with zero tolerance” but are done on a case-by-case basis when the child’s safety is believed to be in jeopardy. In the case of Julio and Brayan, the CBP official said that a routine background check confirmed Julio’s ties to the MS-13 gang.

This report comes mere days after Border Patrol agents fired rubber bullets and tear gas across the Mexican border and at asylum-seekers and immigrants who were protesting at the San Ysidro Port of Entry. Children were among the people in the crowd who were attacked, making it all the more clear that the Trump administration will continue to target families with small children as part of its reactionary anti-immigration and asylum strategy.

Underscoring the Trump administration’s animosity toward migrants, including kids, is a report that the Department of Homeland Security is extracting information from asylum-seeking children in order to target their parents. In a letter dated Wednesday and addressed to DHS secretary Kirstjen Nielsen, civil and human rights advocates and many other related organizations condemned DHS’ practice of using children as informants against their parents, many of whom are fleeing gang violence in their home countries.

“This is the reality: Your agencies are taking scared, jailed children who are desperate to see their families, asking them to identify their relatives so that they can be reunited — and then using that data to find, arrest, and deport those families,” the letter reads in part. Signatories include Mijente, the ACLU, the National Institute for Reproductive Health, the Government Accountability Project, and more.

Meanwhile, the Associated Press reports this week that the administration has forgone FBI background checks for employees at the youth detention center in Tornillo, Texas, where more than 2,000 asylum-seeking and immigrant teens are presently detained. The Trump administration initially claimed the camp would hold up to 360 minors, but again: That turned out not to be true. In fact, construction to expand the camp to be even larger is underway.

Not only are there now thousands of kids being held in a desert detention camp, but they’re being detained by individuals who have not gone through background check protocols that are supposed to be standard. According to a memo from the Department of Health and Human Services, staff at Tornillo are not undergoing fingerprinting by the FBI.

“Instead, Tornillo is using checks conducted by a private contractor that has access to less comprehensive data, thereby heightening the risk that an individual with a criminal history could have direct access to children,” the memo says, according to the AP.

Further, children detained in Tornillo are being denied access to mental health care amid the trauma of being forced from their homes due to violence, traversing from Central America all the way to the United States, being separated from their parents, and being held in a desert detention camp.

The administration’s cruel and inhumane strategies that target some of the world’s most vulnerable people continue apace amid outcry from asylum-seekers, immigrants, and human rights advocates. As Border Patrol fires chemical weapons and rubber bullets at families, tears children from their parents at the border, forces children to inform on their parents, and holds asylum-seeking and migrant youth in prison, it’s more than clear that Trump’s immigration agenda is perhaps worse than anyone predicted.

Elizabeth King
Elizabeth King is a politics, history, and culture writer based in the Twin Cities. She is generally pretty cranky but still enjoys traveling, music from the early 2000's, and plotting the resistance. Feel free to say hi on Twitter at @ekingc or check out some of her work at www.elizabethcking.com.
Controversy
Current Events
Controversy Immigration Politics