These Canadian Activists Will Make You Dare to Challenge History 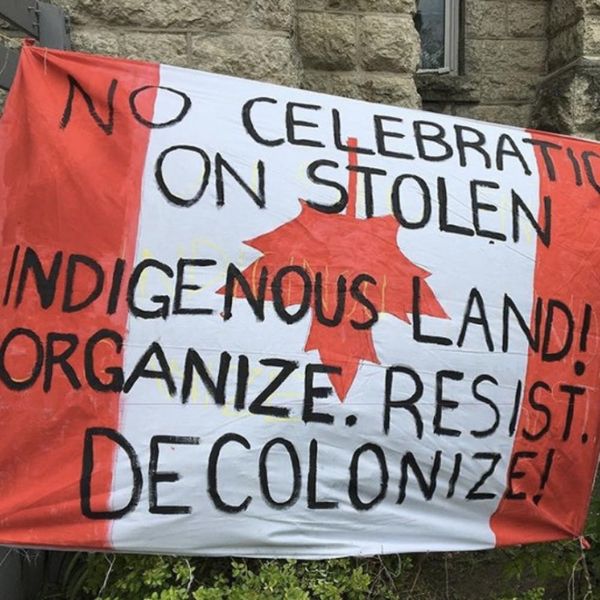 There’s more to Canada than Drake and Justin Trudeau. Canada Day celebrations took place across the country over the July 1 weekend, as our northern neighbors commemorated the 150th anniversary of Canadian confederation. The festivities and fanfare of Canada’s 150th birthday included everything from fireworks to art installations and free concerts, including one featuring Drake in Ottawa’s Parliament Hill. But while each province showcased their own brand of homegrown pride, a group of activists banded together under the #Resistance150 handle and hashtag on Twitter to remind folks that not everyone in Canada was in the mood to celebrate.

By and large, many Indigenous folks have been left out of the Canada 150 narrative, which tends to overlook the country’s colonial history. In response, Métis visual artist Christi Belcourt, Cree activist Tanya Kappo, Métis author Maria Campbell, and teacher Isaac Murdoch spearheaded the #Resistance150 campaign, which aims to fill in the gaps about what Canada’s true history is — including that 87 percent of Canada has been formed on stolen, Indigenous land.

Since establishing #Resistance 150 eight months ago, the team has been intent on educating the public about the country’s Indigenous legacy through activism work on social media and curated events, many of which have been held exclusively for the Indigenous community.

“I think in Canada there’s been a real important history of Indigenous resistance all along and prior to the Canadian state even existing,” Belcourt said in an interview with CBC Radio. “The idea of celebrating Canada 150 really flies in the face of our continued history of Indigenous nations in this land that go back 15,000 or more years.”

Last Thursday, just over a dozen Indigenous protesters erected a teepee in front of Ottawa’s Parliament Hill. The demonstration wasn’t organized (but was supported) by the #Resistance150 team, and described as a “reoccupation” ceremony to counter Canada’s 150th anniversary.

“People want to reconcile with the Indigenous people but they don’t want to give the land back,” Murdoch told CTV News.

We look forward to following what the #Resistance150 movement inspires, moving forward.

Did you notice the #Resistance150 hashtag on Twitter? Tell us @BritandCo!

From Your Site Articles
Amanda Scriver
Amanda Scriver is a passionate storyteller and body image advocate based out of Toronto, Canada. When she isn't writing for various publications, she finds time to Keep Up With The Kardashians while partaking in life's greatest pleasure: the chip buffet. Don't ask her what her favorite restaurant is, it's complicated
Current Events