These College Students Are Biking 1,700 Miles Down the Pacific Coast to Fight Human Trafficking 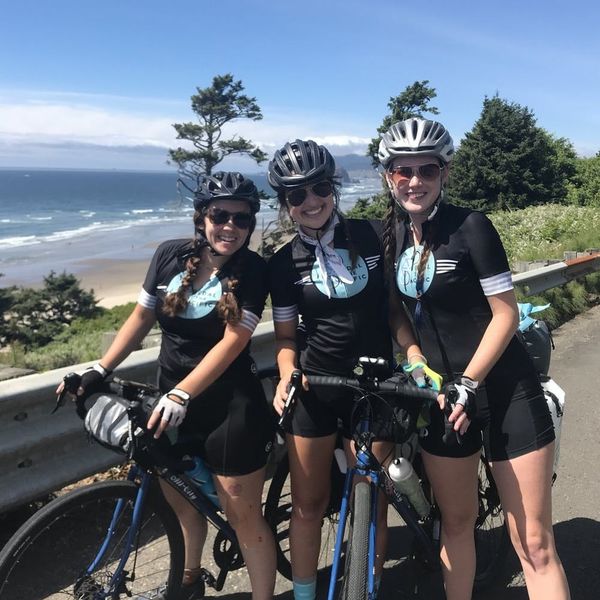 Madi Warner was a high school senior falling down an Instagram hole when she came across the first-annual Pedal the Pacific, a 1,700-mile charity bike ride to fight human trafficking in the US. The Fairhope, Alabama, teen was already familiar with the issue, thanks to an informative lecture by a guest speaker at her church a few years earlier. She’d been completely shocked to learn that human trafficking was an issue that touched her sleepy hometown, but she didn’t know if there was anything she could do to help. Discovering Pedal the Pacific on Instagram felt like fate.

Fast forward a year, and Warner is one of the 11 women selected from 83 applicants across the country to bike from Seattle to San Diego on Pedal the Pacific’s 2018 team. She calls us two weeks into the journey from Port Orford, Oregon.

Human trafficking statistics are scary. The Polaris Project reported that, in 2017, human trafficking in the US was up 13 percent from the previous year, making it one of the fastest-growing crimes in the country. Women and children are the primary targets of trafficking operations, and a majority wind up being coerced into sex work. New immigrants or migrants are the most vulnerable to trafficking within the US, especially those with precarious status in the country.

Pedal the Pacific was founded in 2017 by then-college seniors Sara Belmer, Savannah Lovelace, and Grace Pfeffer to raise money for The Refuge Ranch, a home near Austin, Texas, set to open 48 beds for youth aged 11 to 19 who have been saved from sex trafficking. The Refuge Ranch’s trauma-informed, long-term-home facility aims to provide these young people with counseling services to help heal and the opportunity to continue their schooling.

This year’s riders aim to raise $250,000 for The Refuge Ranch and have also created what they are calling a “passion fund” as part of their larger fundraising goal. The passion fund will be set aside to help Refuge Ranch residents pursue extracurriculars they love without having to worry about associated costs.

“The passion fund will give girls an option to say, ‘I want to spend my time on, and I have a passion for, say, photography,’ or learn how to ride a bike, or ‘I want to paint,’ and our money will be used to make that happen,” explains Gabi Siewczynski, a 21-year-old from Austin, Texas. “[It] is super cool because those girls often times had so many things taken from them or stripped away from them… they’ll be able to claim something they love for their own and develop that and have that to hang on to.”

By the time the riders complete their ride — likely sometime next week — The Refuge Ranch will officially be open. The organization expects all 48 beds to be filled within one month and could become a model for other states with high human trafficking numbers like California, Florida, and states up both coasts.

“You have to start somewhere,” Warner says. “And The Refuge is a really big banner of hope for this whole movement.” Adds Siewczynski: “It’s cool to see and be a part of.”

For this team of 11, who brand themselves as “hilariously un-athletic girls,” the ride is a mental and physical challenge with nightly camping, daily rides of up to 55 miles, and relying on donations for food and, if they’re lucky, the occasional hotel stay on their journey. And even though the girls didn’t know each other when the ride began, they say they’ve become such close friends in such a short time that it’s hard to remember a time before they were in each other’s lives and sharing this life-changing experience.

“It’s been a fun thing waking up every morning,” Warner laughs. “Our eyes are swollen because we’ve been laying on the flat ground, and every single morning is oatmeal. If you don’t like oatmeal, you eat banana and peanut butter.”

To donate to the 2018 Pedal the Pacific team, head to their website.

(Photos via Pedal the Pacific)

Kat Armstrong
Kat has been a writer, social media maven and mom for longer than she's willing to admit. She's also spent time in front of and behind the camera, interviewing celebs, politicians and acting as a producer for fashion and artistic photography shoots. When she isn't writing for various orgs and publications, she's hanging with her kids, husband and French Bulldog, Peter, in Toronto, Canada.
Activism
Empowerment
Activism