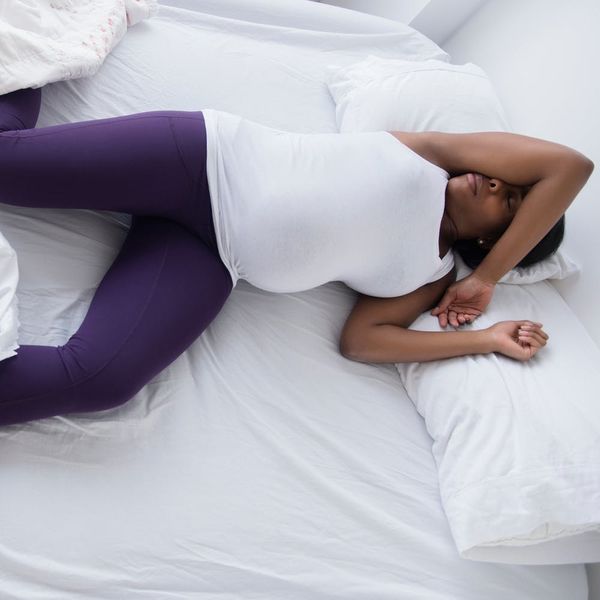 You’re in your 452nd week of pregnancy (okay, maybe you’re only 42ish weeks along), and that big ol’ birth day can’t come soon enough. Your doc isn’t ready to induce just yet, and you are all about Sherlock Holmes-ing your way to a self-induction. Being the super-sleuth that you are, you’re pretty sure you’ve found a winner. Hold the phone, mama! Before you try any so-called “labor inducer,” check out these myths about kicking off childbirth at home.

1. Spicy Foods: Spicy foods are rumored to work their childbirth magic by stimulating the digestive system. Well, they certainly will stimulate your digestive system — chances are you’ve witnessed that first-hand at some point in your culinary adventures. The thinking here is that an overstimulated colon will nudge your uterus along, but we’re here to tell you that it won’t. If you’re into a spicy five out of five on the pad Thai, go for it. Just don’t expect it to make you go into labor.

2. Romantic Time: The last thing you want to do at 40+ weeks pregnant is get busy with your S.O. Even though your other half thinks your pregnant bod is super-sexy, you’d rather snuggle up with Ben and Jerry than just about anyone else. But sex is said to work as a natural labor inducer. There are two theories behind this one. Supposedly the prostaglandins in a man’s sperm can trigger contractions. It’s also thought that the contractions of the uterus that happen during an orgasm can move you along into labor. Chances are, sex won’t work if your labor isn’t ready to start. However, it might be the last chance you have to get romantic for the next few weeks/months, so we say go ahead and give it a try ;)

3. Castor Oil: The labor-inducing theory here is kind of like the spicy foods one but without the yummy taste. Castor oil is a laxative, and the cramping caused by this laxative is supposed to trigger your uterus to also cramp — and contract. This is unlikely to result in baby’s arrival, and beyond that, the laxative effects of castor oil can cause major discomfort and dangerous dehydration. If you absolutely must try some sort of labor inducing method that involves your digestive system, stick with spicy foods instead.

4. Walking: This one’s a mixed bag. While it’s unlikely a walk will get your contractions started, walking may help to move labor along once it’s begun. And as long as you’re not walking in extreme heat or straining your body in any way, a light walk is a great way give your very pregnant body some much-needed physical activity.

5. Tea Time: Red raspberry leaf tea sounds like a rather delightful and quaint way of starting labor. It’s chemical-free and doesn’t require the doc to pump you full of meds. Some say this specific type of tea tones the uterine muscles and may bring on labor, but there’s really no medical evidence to support this theory. If you’re totally into tea time, have a cup. But it’s a good idea to check with your doctor before using any kind of home remedy.

6. Jumping: Hopping on a trampoline, jumping rope, and doing a zillion jumping jacks may build up your quads and calves, but they won’t push the baby out. On top of that, excessive jumping at nine months pregnant may put you at risk for a fall or serious injury. Save it for after baby’s out.

7. Evening Primrose: Don’t let the innocent-sounding name fool you; ingesting evening primrose oil is downright dangerous. It’s not a regulated substance, and too much of the stuff can do more than cause contractions — it can cause your uterus to rupture. The body converts the oil into labor-inducing prostaglandins, and though it may cause your cervix to soften and labor to start, it’s a very bad idea to try.

Erica Loop
Erica Loop is a freelance writer living in Pittsburgh. When she's not busy creating kids' activities for her blog Mini Monets and Mommies, you can find her trying to hang out with her teenage son, being chased by her two Olde Boston Bulldogs or teaching a children's karate class (she's a third degree black belt!).
Pregnancy
More From Pregnancy