5 Things We Can All Learn from Amy Schumer 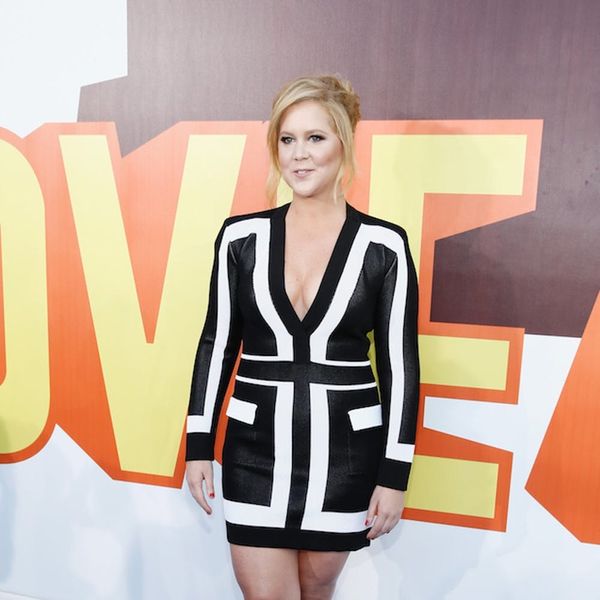 As you’ve probably noticed, Amy Schumer is having a moment right now. Steadily rolling out a stellar new lineup of skits and standup since the third season of her Comedy Central series debuted this spring, she’s coming on strong and we’re absolutely loving it. Forever smashing the so-tired-it’s-sleepwalking notion that women can’t be funny, she’s handily eviscerating every outdated trope and taboo she can find and making us laugh until it hurts. The major bonus is that she’s practically teaching a master’s class in living your best life with her don’t-mess-with-me attitude and on-point interviews (in pretty much the same way our own personal spirit animals Amy Poehler and Tina Fey do just by being themselves). So, make yourself a tipsy wine slushy and settle in. It’s time to take notes on some high-level life lessons, Schumer-style.

1. We can do what we want with our makeup. When Amy’s One Direction-style sendup “Girl You Don’t Need Makeup” debuted last month, we tilted our heads back and roared a collective “YASSS.” Perfectly skewering the mixed messages we receive every day about natural beauty, this spot-on spoof quickly escalated into a social media phenomenon. The #girlyoudontneedmakeup hashtag took over twitter as women from all walks of life brought their no-makeup selfies to the next level, tweeting about their lives with candor and thanking Amy for hers. “I have been brought to tears with all the strong, badass, incredible women tonight,” she tweeted. “In jungles, jumping out of planes, holding their babies’ and mothers’ hands…. We are sisters and fighters and laughers and happy strong women.” Women who, quite frankly, can wear as much or as little makeup as we please. (Photo via Rich Polk/Getty)

2. Double standards are real, and we can — and should — call them out. Look, when you’ve got the nod from Tina Fey, Patricia Arquette and Julia Louis-Dreyfus — all of whom are willing to work with you without hesitation — you’re doing something right. So right, in fact, that the moment the quartet’s NSFW skit aired, it popped open a giant metaphoric pressure release valve in the direction of the entertainment industry (followed quickly by Amy’s instant-classic reboot of 12 Angry Men). With a pitch-perfect critique of the way Hollywood demonizes women for aging, the comedians gathered for a farewell picnic and literally sent Louis-Dreyfus up a creek in a canoe once she’d become — gasp — “a woman of a certain age.” Pointing a white-hot spotlight at a topic rarely addressed in everyday conversation, the Comedy Central star is taking a big step forward and dragging an arguably lopsided industry along with her, whether it likes it or not. (Photo via Michael Buckner/Getty)

3. We get to determine who we are and how we feel about ourselves. When she was asked to speak at the Gloria Awards and Gala hosted by Ms. magazine last year, Amy’s words packed a major punch. After telling a story about a regrettable — no, make that soul-flattening — encounter she’d had with a crush in college, she spoke of the moment she decided to be the keeper of her own self-worth. “Now I feel strong and beautiful,” she said. “I walk proudly down the streets of Manhattan. The people I love, love me. I make the funniest people in the country laugh, and they are my friends. I am a great friend and an even better sister. I have fought my way through harsh criticism and death threats for speaking my mind. I am alive, like the strong women in this room before me. I am a hot-blooded fighter and I am fearless.” Words to live by, really. (Photo via Michael Buckner/Getty)

4. We can move important, uncomfortable conversations forward with humor. When Amy’s new season premiered this March, Kevin Fallon from The Daily Beastcouldn’t have summed it up better. “Framed with four searing, impeccably crafted sketches and punctuated with what might just be the most illuminating interview with a trans woman that has ever aired on television, the Inside Amy Schumer premiere was, well, everything,” Fallon wrote. “It was modern. It was feminist in a way that was both matter-of-fact and in-your-face important. It was a response to the idea that women aren’t funny, while also ambivalent of the conversation altogether. It was an episode blanketed with gender-specific comedy, but with a reach that was universal. It shamed our biases, our titillations and our idiocy, and at the same time celebrated those very things. No comedy series ‘says something’ with as much authority and essential humor.” The article also called her “the comic genius we’ve all been waiting for.” Can’t say we disagree there. (Photo via Jamie McCarthy/Getty)

5. We don’t have to apologize for being confident. Adding to the already-perfect words we’ve all memorized by now from Chimamanda Ngozi Adichie by way of “Flawless,” Amy closed her Gloria Awards speech without pulling any punches. “I am a woman with thoughts and questions and sh** to say,” she began. “I say if I’m beautiful. I say if I’m strong. You will not determine my story — I will. I will speak and share and f*** and love and I will never apologize to the frightened millions who resent that they never had it in them to do it. I stand here and I am amazing, for you. Not because of you. I am not who I sleep with. I am not my weight. I am not my mother. I am myself. And I am all of you, and I thank you.” (Photo via Ethan Miller/Getty)

Now, don’t mind us if we stand a little taller from here on out. Thanks, Amy!

What are some of your favorite Amy Schumer moments lately? Tell us in the comment section.

Amy Lynch
Amy is a freelance writer and editor, telling the stories of progressive people and projects that move the world forward. Her work has appeared on The Hairpin, Refinery29, Citygram and more, and she's developed content for the likes of Alternative Apparel, Milkshake and Silvercar. She lives, works and plays with her fiancé and their dog, Bogey, in the weird, wild heart of Austin, Texas.
Feminism
Home News
Feminism