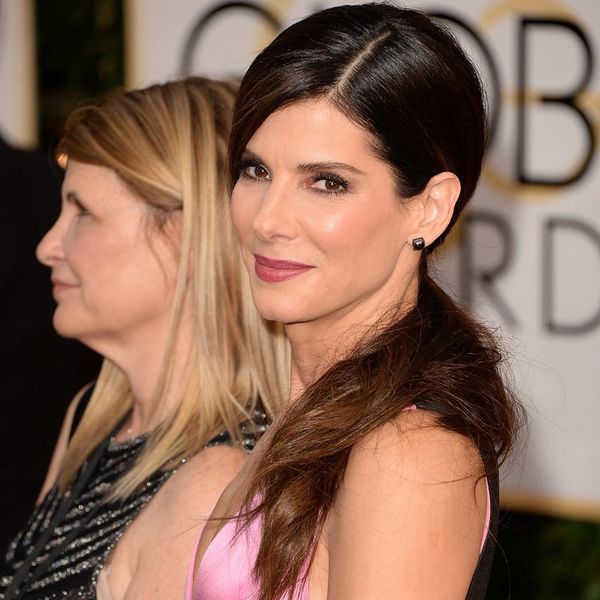 There are those unnervingly beautiful celebrities you can’t help but stare at and just think “is that person actually human?” – Angelina Jolie, we’re looking at you. And there are the ones that seem so relatable, it kind of feels like they’re your BFF. Sandra Bullock falls somewhere in between those two categories. She’s been a permanent favorite of ours ever since the days of While Your Were Sleeping and Practical Magic and has only managed to get even cooler since then. So it should come as no surprise that the 50-year-old actress was recently named People Magazine’s “Most Beautiful Woman” of 2015.

Upon hearing about the nomination, Bullock told People she laughed, thought it was ridiculous and told no one. This, in a nutshell, describes just why Bullock is the best kind of beauty – modesty is key. She goes on to explain how she defines the word “beautiful.” Bullock tells People, “Real beauty is quiet. Especially in this town [Hollywood], it’s just so hard not to say, “Oh, I need to look like that.” No, be a good person, be a good mom, do a good job with the lunch, let someone cut in front of you who looks like they’re in a bigger hurry. The people I find most beautiful are the ones who aren’t trying.” And that, Ms. Bullock is exactly why you made it to the top of the list.

People’s “Most Beautiful” issue (which also features 192 other beauties) got us thinking about all the ladies we look up to – not only in the beauty department but also in regards to their career and life achievements. Here are 10 ladies who we’d place at the top of the list for being beautiful both inside and out.

1. Emma Watson: Yes, Emma Watson is a total stunner and an amazing actress but what we really love about this British beauty is her recent work as a U.N. Goodwill Ambassador and her advocacy for gender equality and the HeForShe campaign. If you’re in need of a little mid-day inspiration, watch her historic speech, which has more than 6 million YouTube views. (Photo via Frederick M. Brown/Getty)

2. Karlie Kloss: This all-American supermodel (and T.Swift’s BFF) is only 22-years-old but she’s already proven herself to be much more than a pretty face. The model has an ongoing partnership with Momofuku Milk Bar on a line of cookies that have a charitable aspect. The proceeds from the cookies have provided half-a-million nutritious meals to those in need around the world. More recently, Karlie has also launched a scholarship competition where she will send 10 young girls to the Flatiron School this summer to learn to code — something she knows how to do too. (Photo via Stuart C. Wilson/Getty)

3. Mo’ne Davis: This 13-year-old first made history last August as the first African-American girl to play in a Little League Championship. But not only did she play, she also won and pitched a shutout. Oh yeah, and she’s also the first Little League baseball player to appear on the cover of Sports Illustrated. More recently, Davis has launched a sneaker line where the proceeds go to the Because I Am Girl charity, a global initiative to end gender inequality, promote girls’ rights and lift millions of girls out of poverty. (Photo via Jason Merritt/Getty)

4. Tess Holliday: This plus-size model has been an Instagram sensation for some time now due to her constant stream of positive body image messages. She was even the one to spearhead the popular hashtag #effyourbeautystandards. Earlier this year, Tess became the first plus-size model of her height and size (she’s 5′ 5″ and a size 22) to be signed to a major modeling agency. (Photo via @tessholliday)

5. Amy Poehler: Amy will always have a place in our hearts as the legendary Leslie Knope, but outside the realm of her Parks and Rec character, Amy is making waves with her website Smart Girls. The site offers young women a place where they can learn issues facing their generation, read interviews with influential women + a whole lot more. (Photo via Larry Busacca/Getty)

6. Michelle Obama: Her husband runs the country, but Mrs. Obama is making big changes all on her own. The first lady has made the fight against obesity and for childhood fitness a major focus of her gig by launching the Let’s Move initiative back in 2010. She’s also worked with Jill Biden on Joining Forces, an initiative to help veterans and started Reach Higher, an effort to inspire young Americans to take charge of their future by continuing their education past high school. (Photo via Pool/Getty)

7. Jenna Lyons: You didn’t think we’d leave out our #1 favorite lady boss, did you? This NY beauty is full of fashion tips, but we look to her even more regularly for some seriously notable career advice. The J.Crew creative director, who started working for the company 24 years as an assistant to an assistant, is no stranger to the value of hard work.

8. Tavi Gevinson: This fashion icon is only 18-years-old, but has already proven herself to be a serious businesswoman. Tavi started her own blog at age 11, has hosted a Ted Talk and is now the editor-in-chief of Rookie Mag.

9. Elizabeth Holmes: Here’s a name you might not yet be familiar with, but we’re betting you’ll know it soon. At the age of 31, Holmes is the youngest self-made billionaire in world. The Stanford dropout founded Theranos, the world’s leading biotech company. She and her company want to take high-tech approach to blood test by using a pin prick to the finger rather than a needle to the arm. Holmes wants to provide a faster and cheaper alternative to a process that has not been changed for decades. (Photo via Steve Jennings/Getty)

10. Beyoncé: Because, c’mon, we can’t not include her on this list. Sure, Bey is something of beauty royalty, but she has also launched a vegan food service, is collaborating on a shoe line and runs the philanthropic initiative #BeyGOOD, which helps the homeless, sick children and the unemployed. (Photo via Jason Merritt/Getty)