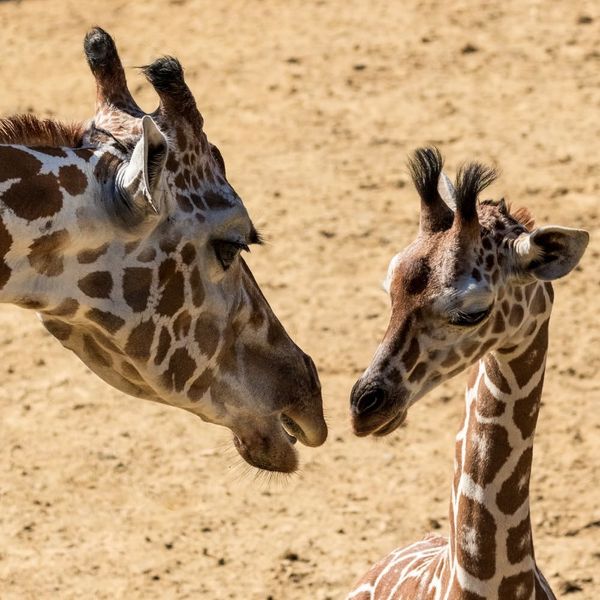 April is like most expectant mothers. She’s been showing off her adorable baby bump, she’s nesting her heart out, and her fella, Oliver, has been by her side to check in as her due date approached. April also happens to be a giraffe, and the world has been waiting alongside her with bated breath for her babe to arrive, as the birth is being live-streamed for all to see.

The 15-year-old giraffe, who lives at the Animal Adventure Park in Harpursville, New York, has already given birth to four calves and is expecting the fifth any day now. At a whopping 15 months along (yep, giraffes are pregnant for 15 months!), April has been spending most of her time lately chilling in her pen while her babe can be seen moving around in her tummy like wild. There’s no doubt that the little one is ready to make its big entrance and fans from around the world can’t even handle it: They’ve been waiting for DAYS now.

I keep checking in on this giraffe.

*me talking to Siri this morning*
HAS APRIL THE GIRAFFE HAD HER BABY YET YES OR NO pic.twitter.com/UX4eTYUV6X

Me waiting for April the giraffe to have her baby. #AprilTheGiraffe #giraffewatch pic.twitter.com/9QBHeMaMLL

If April would go ahead and give birth to this baby giraffe, it would be much appreciated. Can't take my eyes off the live stream

Too funny! You can keep up with the deets yourself at #AprilTheGiraffe or via the regular updates on FB and, of course, check out April and her birthing live-steam below. Friday night plans = Made!

Have you been watching #AprilTheGiraffe? Will you be now? Let us know @BritandCo!

Desiree O
Desirée O is a ‘Professional Bohemian’ who loves anything and everything related to the arts, entertainment, and pop culture. She ADORES being a ‘Newsy’ for Brit + Co, covering all of the latest tidbits of awesomeness that you want to read about. When she’s not writing, she’s either making messy art, going on long adventurous walks with her camera, or poking around over at bohemianizm (http://www.bohemianizm.com/). You can find out about Desirée O and her work at http://DesireeO.com/ or follow her on Twitter @DesireeO.
social media
Entertainment
social media twitter
More From Entertainment