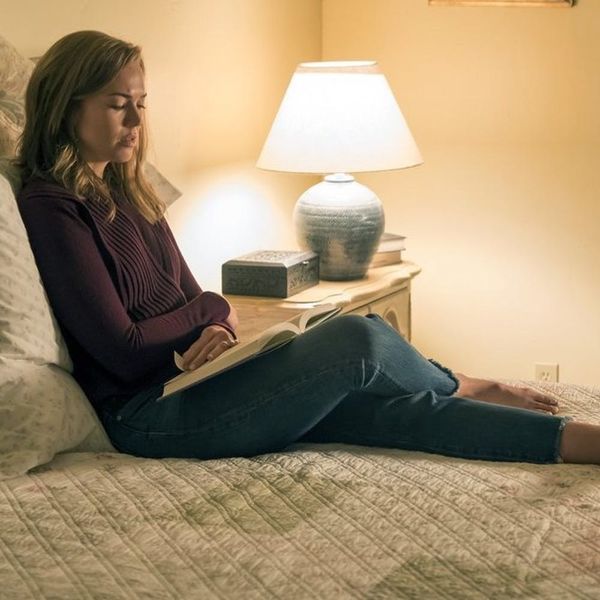 So, here’s what we know based on that “big clue” everyone was teasing: It appears that Jack may have died in a house fire (which is kind of in line with one of the more believable theories about his death), and that Kevin was told of his father’s passing by sister Kate. At the end of Tuesday’s episode, Rebecca was shown at the site of the burned remains of the Pearson family home, with Jack’s personal belongings (including his wedding ring) beside her in the front seat of the car. The “Big Three” were 17 years old when this happened.

We also learned in the episode just how bad Jack’s drinking had become, and saw Rebecca’s hope for helping her estranged husband. But what about some of the more subtle clues? Series creator Dan Fogelman shared some of the less obvious pieces of the puzzle in a short postmortem, That Was Us, after the premiere.

Everyone has their moments. Hear what the cast has to say about the emotional season premiere of #ThisIsUs, presented by @Chevrolet. pic.twitter.com/lDkOhUngHA

In conversation with Milo Ventimiglia (who plays Jack), Fogelman pointed to some small details in that final scene that may be more significant than they initially appear: “We’ve been teasing it as this big piece of a puzzle about Jack’s death… and I think with any puzzle, there’s a bunch of clues at the end of the episode. You see the dog with Kate and you see the redheaded girl who you’re not quite sure who she is with Randall, and you see Kevin and his leg.” (Did you catch those? What do you think they mean?)

“We know we’re marching toward something and we now know what we’re marching towards and we have these little markers that I think you’ll see in the course of the season that will bring you closer to everything people want to know about Jack’s death,” Fogelman explained, teasing that there’s still so much more to uncover.

Case in point: During a particularly emotional scene between Kevin (Justin Hartley) and Toby (Chris Sullivan), the soon-to-be brothers-in-law argued over what was best for Kate (Chrissy Metz). Toby accused Kevin of coddling her and pointedly reminded him that he’s “not her father” — which clearly hit a nerve with Kev. Does this argument have some clues to Kate and Kevin’s relationship after the loss of Jack? What happened to the family between that tragedy and today?

We’re anxious for answers, but as Ventimiglia reminded fans, we have to let the story unfold. “Pay attention… and be patient,” he advised.

What do you think will happen on this season of This Is Us? Tell us your theories @BritandCo!